Chimney Stacks is a unique online pokie from Bally Technologies with a fun theme and 40 generous paylines. There are two different wild symbols available in this game which increase your odds of winning big, along with a free spins round that offers up all sorts of impressive bonus prizes. Read our full review below.

Chimney Stacks, a great game from Bally, is now available to play for free at Online Pokies 4U. Featuring a novel Victorian theme, a wide range of prizes and some unique special features, this game definitely stands out in a sea of free pokies. There are numerous ways to win in this game thanks to a high number of fixed paylines and a total of 12 symbols: nine regular symbols plus special types for wild and two kinds of scatter bonuses.

As one of Bally's most popular titles, Chimney Stacks will leave you wanting more - that's why we offer up plenty of other great titles from this developer like Titanic and Moon Goddess.

This game has 40 fixed paylines and five reels, which are presented in a five x four configuration. As previously mentioned, there are nine regular prize symbols. These are used to award prizes to lucky players for successful three-, four- and five-of-a-kind adjacent symbol matches. The higher value symbols in this game are objects in keeping with Chimney Stacks' Victorian theme, such as a top hat, a weathervane and bellows.

The lower value symbols are represented by playing card-derived values typical to most pokies: A, K, Q, J, 10 and 9. Of the higher value symbols, the top hat is the most desirable and awards the highest normal prize in the game, closely followed by the bellows. At the other end of the scale are J, 10 and 9, the least valuable of the lower value symbols; however, with this many paylines and bonus features, these can soon add up in a big way. 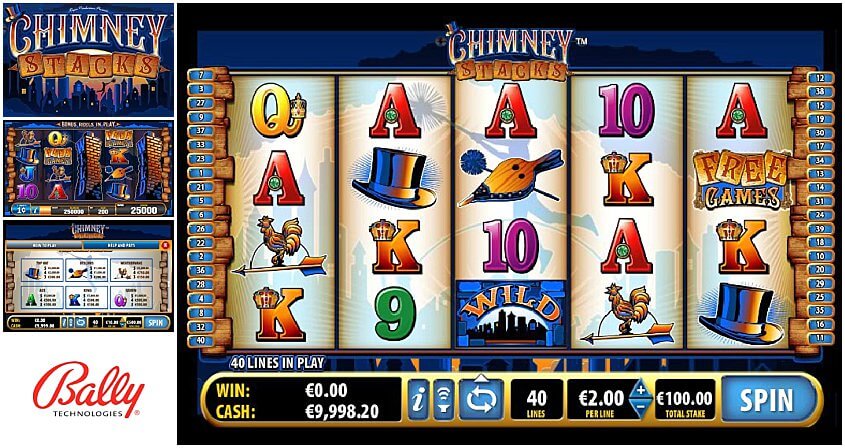 Unlike a number of other pokies, Chimney Stacks features two types of wild symbol for even more chances to win. The first is the cityscape picture, which can award prizes of an equivalent value to the top hat for finding instances of three to five on an active payline. This symbol can also be used to substitute any other symbol, with the exception of the scatter, as part of a winning combination in a valid configuration.

True to the name of the game, there are also stacked chimneys in the form of chimney stack wild symbols. These can appear randomly during free spins on reels two to five and function in the same way as regular wilds but stay locked in position until the end of the bonus round.

The third and final special symbol is quite possibly the most valuable. Appearing only on reels one, three and five, the 'free games' symbol, as its name would suggest, awards free spins for finding instances of three in any configuration on the said reels. Lucky players who manage to find all three symbols will find themselves with ten free spins, which are played using the current stake at the time the round was triggered.

Although the other special symbols disappear during this mode, exclusive chimney stack symbols take the place of regular wilds. The lack of special symbols also means that this feature cannot be retriggered during free games for additional spins. It is also worth mentioning that the initial bonus round triggering win awards a prize of four x the total stake.