A game based on the legend that is Ron Burgundy? Can pokies games actually get better than this? Developed by Bally and available to enjoy for free and on mobile devices, this excellent 25 payline game boasts seven bonus features and three generous jackpots. Read our full review below.

This hugely enjoyable game is based on the laugh-out-loud 2004 movie of the same name - Anchorman: The Legend of Ron Burgundy. Played by Will Ferrell, Ron Burgundy is your typical 1970s dim-witted, sexist news anchorman. However, the strangely lovable character manages to bag the lady AND become a hero when he saves a panda at San Diego zoo. Using this cult movie to base a pokie on was an inspired decision by Bally, as the film was, and still is, incredibly popular. The film also features Christina Applegate, Paul Rudd and Steve Carell.

As the game loads, the first thing you notice is the funky 70s soundtrack. You will see Ron Burgundy’s face at the top, and you can’t miss it, in fact. The background to the reels is based on the back screen of a newsdesk, whilst joining Ron along the top of the reels are the characters, Brick Tamland, Brian Fantana and Ron’s beloved pet dog. The colour themes are a striking 1970s orange, as well as royal blue, yellow and red. One could argue that the graphics are fairly basic, but to miss the 70s inspired clunkiness of some of the graphics would be to miss the point. 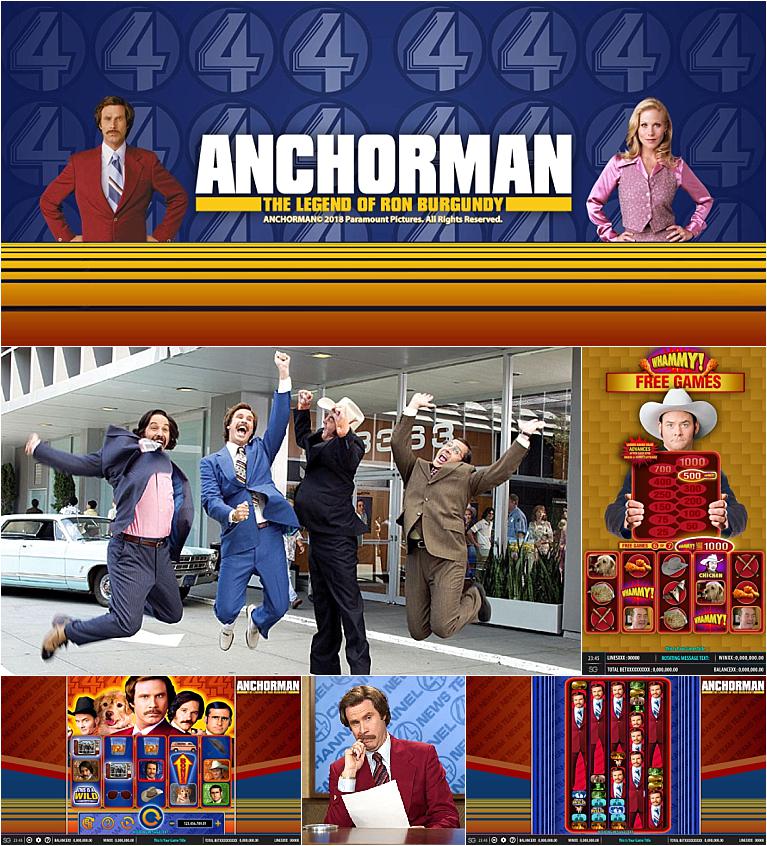 How to play Anchorman pokies

This game is so easy to play, even Ron Burgundy could manage it. Bets are made across all 25 paylines, so all you need to do is choose your total wager of between £0.75 and £150 and hit the spin button.

What is the RTP of Anchorman?

This game has a generous RTP of 96.3%. With most pokies sitting a bit below this, this game is an excellent choice for those who want to win back, on average, almost as much as they put in.

How to win at Anchorman pokies

Look out for three or more symbols in a row. The highest is Ron himself who pays out 400x your line bet when he appears five times in a line. The Wild symbol can mean more winnings, as it substitutes for all other symbols (apart from the Bonus Scatter and the Whammy symbol).

The biggest wins come when you reach the Big Bonus Spin, which may result in either the Nice Jackpot, the Very Nice Jackpot or the Really Good Jackpot, paying out 5,000, 20,000 and 200,000 coins respectively.

Three or more Bonus Scatter symbols mean players are awarded 1 free spin on the Big Bonus Reel. It may not sound a lot, but this bonus reel features three jackpots and three further, huge cash prizes. This one free spin may also result in one of four additional feature rounds - Ron’s Giant Free Games, Whammy’s Free Games, Bricks Weather Reels or the Sex Panther Pick Feature. In Ron’s Giant Free Games, 6 free spins are awarded and 19 rows are added, making for a different set of paylines than in the base game. In Whammy’s Free Games, the symbols change to all things Whammy and players get 12 free spins. Brick’s Weather Wheel is a wheel of fortune type game that awards multipliers and level-ups to better wheels. The final bonus feature, the Sex Panther Pick Feature, is hosted, of course, by the character Brian Fantana. In this game, players pick three of 15 bottles, which reveal prizes. They then pick a packet to reveal a multiplier.

If you want to enjoy this funky game for free, then we have some good news for you! Here at Online Pokies 4U, this game is one of many that we offer in fun mode. Playing for free gives you a chance to get to know the many facets of this game before you wager real money. It also means you don’t have to make a deposit, or hand over any personal details. Many pokies players have decided to stick with free play mode, as it’s completely risk free.

Like all Bally games, the Anchorman pokie has been optimised for use on mobile and tablet devices. This means you can enjoy the game wherever you are. Mobile pokie playing is so much fun, just pick up your device and get stuck in at any time of day.

This is a brilliant slot. It’s fun, feisty, has a great soundtrack and loads of bonus features. If you love comedy films, you’ll also love the movie pokies Ted, Mars Attack, Monty Python and the Holy Grail, Nacho Libre and Naked Gun.

Can I play Anchorman pokies for free?

Yes you can. It’s free to play here at Online Pokies 4U, where you'll find loads more Bally pokies.

Does Anchorman have free spins?

Yes, there are free spins available in the features Ron’s Giant Wins and Whammy’s Free Games, as well as the one free spin on the Big Bonus Reel when you get three or more Scatters.

Can I win real money while playing Anchorman pokies?

Yes you can. But to win real money, you need to sign up at an online casino and deposit money. Then you’ll need to wager your money in the game.

Can I play Anchorman pokies with no deposit?

Yes you can. When you play the game here at Online Pokies 4U, we don’t ask you to make any deposit at all.

There’s no need. Whether you are playing for real money or in fun mode, on a phone or a desktop, you don’t need to download the game or any supporting software either. It’s always available to enjoy in-browser.