Head to Mexico to masquerade as a musician in Mariachi, a fun new game from Stakelogic that features 40 paylines and 5 reels. The game also offers a selection of bonus features, including a bonus game that can pay out up to 24 free spins! Read our full review below.

We love the fun vibe that this Stakelogic game gives off. The graphics have a comic book feel to them, and the reels are set against a dusty, empty desert town in Mexico. The symbols are also very well designed, featuring classic Mariachi instruments and characters. The game offers both high paying and low paying symbols, and the low paying symbols are represented by the classic playing cards that can be found in hundreds of other online games.

The higher paying symbols are represented by Mariachi instruments, including guitars, trumpets and violins, as well as the three members of the band itself. These symbols don’t appear as frequently as the playing card symbols, but they are worth looking out for as they offer more generous prizes. The game also has a wild symbol that is represented by a wanted poster.

You can play this game from between 0.4 and 48 per spin, so there is a lot of variation. This means that the game will appeal to a wide range of players, from big spenders to players who are on a strict budget.

One of the main bonus features on offer in this game is the Lock and Spin feature, which you can trigger if you get a fully stacked reel of one of the band members on the first reel. When this happens, the symbols will be locked in place and you will be offered a re-spin, helping to increase your chances of multiple wins.

There is also a Free Spins feature that will be triggered if you manage to land between three and five matching money bag symbols on the reels, and this will pay out between 12 and 24 free spins. During these spins, the lower paying playing cards will slowly be removed from the reels, making it more likely that you will land a big win. 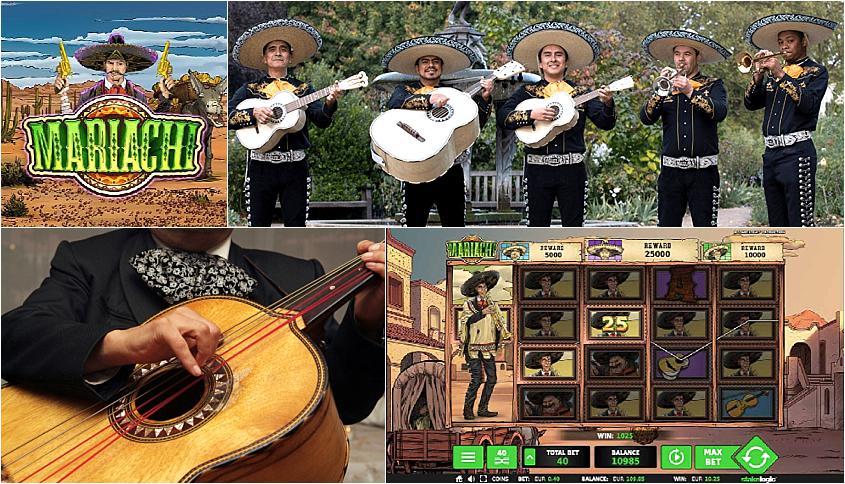 We like this Mexican inspired game, even if the theme itself isn’t very original. Sure, there are a lot of Mariachi games online, but this one is definitely better than most. This is due to the excellent, cartoon style graphics and the fun soundtrack, as well as the superb gameplay and generous bonus features - especially the Lock and Spin feature! Mariachi can be played on desktop, mobile and tablet devices.