Red Tiger Gaming have taken their popular Dragons Luck pokie game and added the Megaways mechanic to it. Now there’s even more to enjoy across the six reels, with the number of rows changing with every spin to create up to 117,649 Ways To Win with every spin. You won’t find any Wilds or Free Spins, but what you will discover is a selection of bonus features to improve your chances of winning a big cash prize, with a top prize worth up to 10,000x your wager. Read our full review below.

Asian-themed pokies are hugely popular at the moment, thanks to the enthusiasm with which the Chinese are taking to online pokie games. And with the reels packed with symbols of good fortune, according to Oriental culture, it’s not surprising that the rest of the world is embracing the trend.

Dragons Luck Megaways looks classy from the moment it loads on to your screen. Against a stunning backdrop of towering snowy peaks, the reels are set between two ornate columns under a pagoda-style roof. A pair of dragons are entwined around the columns, looking as though they’ve been carved from stone, but as we soon discover, that’s far from the case!

The entire game has been designed to be a treat for the eyes, and this extends to the symbols themselves. Against a pale background, the lower-value symbols are represented by playing card icons, here designed as calligraphy brushstrokes, reflecting the game’s theme. Higher-value symbols are represented by a lotus blossom, a koi carp, a white rabbit and the number 138, which is extremely auspicious, representing ‘a lifetime of prosperity’.

Dragons Luck Megaways is stated as having 95.69% RTP, which is a little on the low side but still perfectly valid. It means the game pays out $95.69 in cash prizes for every $100 it takes, although not to the same person! The nature of pokie games means it’s possible to walk away with a huge cash prize, but it’s equally possible to spend your entire stake money with nothing to show for it.

Volatility is usually the best guide as to whether or not you’ll enjoy a specific pokie game. Low-volatility games pay out lots of minor cash awards, so they’re aimed primarily at first-timers, people who mostly play for fun and those with a modest bankroll.

As a high-volatility game, however, Dragons Luck Megaways is firmly aimed at the high-rollers, the thrill-seekers and the gamers with elastic bankrolls. High-volatility pokies ramp up the risk factor, so you really have to work to achieve those all-important Big Wins - but once they start arriving, it’s possible to win huge sums of money.

But even if you don’t have a bottomless budget, it’s still possible to enjoy a gaming session on the reels of Dragons Luck Megaways. Just stay here on our site and enjoy playing the game for free. You can even ramp up your stakes and play just like a real high-stakes player, even though the money isn’t real - watching a Big Win roll in right in front of your eyes is a very heady feeling indeed! And because we’ve all the current Red Tiger pokies here on our site, you can easily compare the Megaways version against the original Dragon's Luck pokie to see which one you prefer. 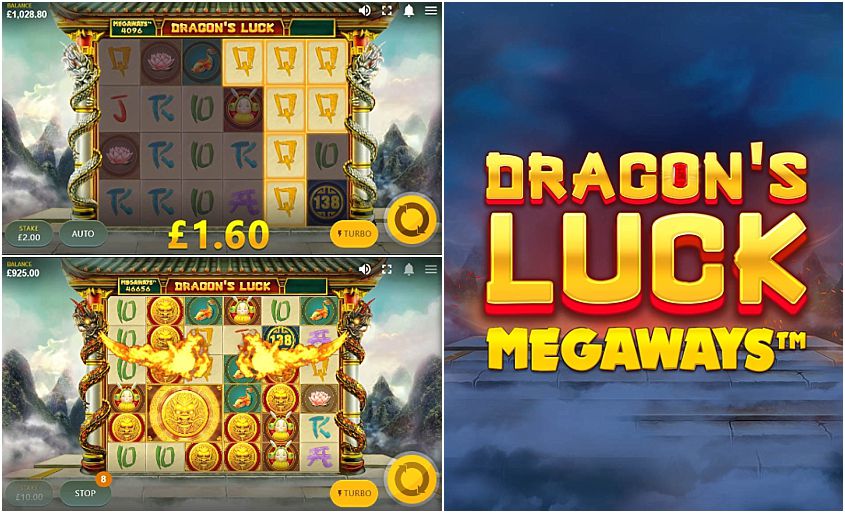 How to Play Dragons Luck Megaways

The Megaways mechanic, originally created by Big Time Gaming and used here under licence from them, does away with traditional paylines. As with the Ways To Win gaming mechanic, the aim is to match three or more symbols on adjacent reels in any position. But with Megaways, the number of rows on each reel varies with every spin, ranging between two and seven, so the number of Ways To Win varies with each spin.

This makes the decision-making processes much easier for players, who can get straight down to the serious business of calculating how much to wager. Quite surprisingly, the betting range is very narrow for a high-volatility game such as this, with the options ranging between just $0.10 up to a maximum of $10.

Once you’ve established the size of your bet, it’s time to hit the Spin button and discover where the reels will take you. There’s a Turbo button for gamers in a hurry, and there’s also an Autoplay function, which delivers up to 100 automatic spins on your behalf, leaving you free to watch the reels and count up your winnings!

Unusually for a Megaways title, Dragons Luck Megaways doesn’t offer up Free Spins, there’s no Wild symbol and not a hint of the Cascading Reels that so often feature in these games. But don’t let that put you off, as there are three great bonus features to enjoy.

Dragon coins appear stacked on the reels, and at the end of a spin they turn to reveal one of the available symbols, potentially leading to some big cash prizes. But Dragon coins also come in a supersized version too, covering up to 4x4 spaces on the grid. Since all Dragon coins become the same symbol, these Colossal Symbols often produce some excellent rewards.

But Dragons Luck Megaways still has one more bonus feature to offer in the form of the two dragons entwined around the game’s columns. Randomly, following any spin, they will come to life and breathe fiery flames across the reels, turning symbols into higher-value ones. And not surprisingly, this feature can generate huge payouts, adding even further to your prize pot.

Can I play Dragons Luck Megaways pokie for free?

Every single game on our site, including Dragons Luck Megaways, is available to play for free, with no membership requirement.

Dragons Luck Megaways has been optimised for use on all devices, so you can enjoy playing the game on all platforms, including mobile and tablet.

There’s no Free Spins Bonus round on the reels of Dragons Luck Megaways, but there are three bonus features to increase your chances of winning a cash prize.

Dragons Luck Megaways has been created using random number mechanics to ensure a completely fair and random result from every spin.

Is it safe to play Dragons Luck Megaways?

Red Tiger Gaming is a highly respected, authorised and licensed pokie game developer, so you can play Dragons Luck Megaways with complete confidence.