Leprechaun’s Magic Megaways is an online pokie from Red Tiger Gaming. This Irish-themed pokie has up to 15,625 ways you can win over its six reels. It also has Expanding Symbols, Magic Symbols and the Magic Wheel. The RTP is 96.02%, and the volatility is high. Read our full review below.

The original Leprechaun’s Magic was fun, but this Red Tiger Gaming version adds the Megaways format to dramatically increase the number of ways to win. There are five rows of six reels in which the variable number of ways to win could rise as high as 15,625. There’s no Wild symbol, and no Cascading Reels like in many Megaways pokies, but there are still plenty of extra features, including Golden Expanding Symbols and possible free spins. If your four higher-paying themed symbols turn gold, your winning potential increases dramatically. Why not try out the free demo and see for yourself?

There’s a reason they call Ireland “The Emerald Isle”, and that reason is more than visible in Leprechaun’s Magic Megaways. You’re in a luscious meadow of thick grass spread with daisies and clover as a merry stream makes its way past. Trees in the background have the old and twisted trunks that suggest some kind of magical origin. The reels themselves are built like a little wooden house with lanterns swinging from the walls.

It's on the reels that you’ll find the Leprechaun himself, one of Ireland’s most recognisable figures of folklore and ever associated with luck and gold. He carries on the green theme with his hat and coat, whilst other valuable symbols like his pipe and a lucky horseshoe also have a place on the paytable. Even card symbols have a Celtic decoration, whilst spinning reels might reveal a glimpse of the rainbow. With all this attention to detail, it’s a shame the sound effects aren’t a little less generic.

Leprechaun’s Magic Megaways may have a different RTP depending on which casino is hosting it, so you should always check. It has been calculated to have an average return of 95.07% in some versions or 96.02% in others. It also has a high variance, so wins may not be frequent, but they could be higher than some lower-volatility games.

How to Play Leprechaun’s Magic Megaways

The basic format is very similar to the original Leprechaun’s Magic, so here’s how to find your luck at the end of this rainbow:

You can start your bet at 0.20 and increase it to 4.00, which admittedly is lower than the 10.00 available in the original Leprechaun’s Magic.

The paytable looks a little like this when it comes to the maximum payouts for each symbol:

After a winning spin your winning symbols will turn gold and lock in place during the next turn. If you hit them a second time, they will expand to stack their entire reel with that one symbol. Golden symbols also remain locked during the Magic Spins round.

Three golden Scatters, represented by the pot of gold, will trigger a free spins round known as Magic Spins. It starts with you spinning the Magic Wheel, which could award you between four and 16 free spins. You can also get an extra four free spins for every extra Scatter you use to trigger the round.

It’s always fun to see the depth the Megaways format can add to otherwise standard pokies, and Leprechaun’s Magic Megaways is no exception. There are lot of chances to win, both in the base game and in the exciting extra features. Add the fact that it’s all depicted with such stunning graphics and there’s very little in this pokie to criticise. Some people will find the high volatility off-putting or wish higher bets were available, but this is a shining example of the free online pokies available here at Online Pokies 4U. 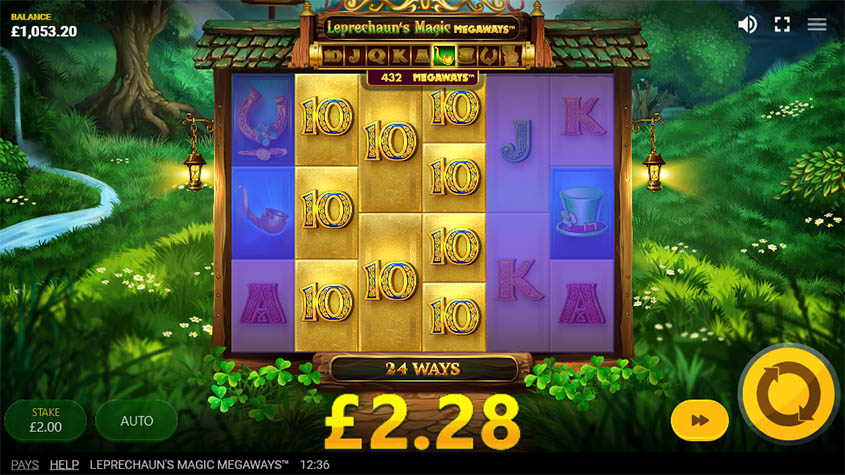 What is the RTP? The RTP can vary, with 95.07% and 96.02% just two of the levels available.
How volatile is this game? It’s high volatility, so high risk and high reward.
What is the biggest win in this game? The top prize is 20,000x.
Does Leprechaun’s Magic Megaways have any bonus rounds? There are two bonus rounds, one with Expanding Golden Symbols and the other a free spins round called Magic Spins (with between four and 12 spins decided by the Magic Wheel, plus extra if you find more Scatters).