Aztec Spins is a pokie made by Red Tiger, with 30 winlines and a maximum payout in excess of 4,500x your stake. The game features six reels and winlines pay both ways. There is also a free spins feature and an RTP of 95.71%. Read our full review below.

With its South American theme, this game is a great addition to the Red Tiger pokies collection. Although it may be a little less sophisticated than others such as the Aztec Bonanza pokies game, it still has enough twists and turns to keep players interested.

The six-reel and four row layout provides 30 win-ways and payouts arise both ways across the grid. A minimum of three of a kind will generate a win, and the two-way payout comes into its own when other symbols are locked.

Behind the grid, you will see the Aztec Wheel and this comes into operation when the related symbol made up of 2x2 tiles is visible in the centre reels, three and four. This prompts the wheel to spin. The rewards are multipliers, free spins, locked symbols and wheel re-spins.

The Stacking Multiplier provides a x10 multiplier which remains until a winning line is hit. The player may win a further multiplier before a winning line and this adds another 10x up to a maximum multiplier of 30x. At this point, the stacking multiplier is replaced by the wheel re-spin feature.

The Aztec Wheel is filled with winning symbols and when a spin lands on one of these, it fills out the centre reels and those reels are locked in the Locked Symbols mode of the game. The other reels spin and when a matching symbol appears, it is also locked in place until a win is triggered.

The initial visuals of the reel and row layout superimposed on the prize wheel makes for a mysterious Aztec vibe, as do the tiles in the form of stone carvings and the golden Aztec Wheel symbol. The gloomy jungle ruins in the background complete the scene, while the rhythmic drumming of the soundtrack is positively hypnotic.

Stakes range from 0.10 to 20.00 per spin, and volatility is medium to high, providing plenty of highs and lows as you play the game. Accordingly, the RTP is down slightly on other pokies, but at 95.71%, it still offers good potential for the player.

The lower symbols pay as follows:

Stakes range from 0.10 to 20.00 per spin, and volatility is medium to high, providing plenty of highs and lows as you play the game. Accordingly, the RTP is down slightly on other pokies, but at 95.71%, it still offers good potential for the player.

The Aztec Wins pokie provides good gameplay, and the look is exciting. The list of features is attractive and the potential for bonus free spins is, well, a bonus, particularly given the increased frequency of the Aztec Wheel spin during this period of the game.

A problem does arise during free spins when the Locked Symbol feature comes into play, meaning that only the four outer reels spin as they try to rack up more winning symbols. Given it may take a high number of initial spins to lock the centre reels, then you may have only a few spins to rack up winning tiles and your chances are thus reduced twofold.

The upside of the Locked Symbols mode is that you may generate a multi-line result with a potential jackpot in excess of 4,983x the stake.

There is no doubt that when the Aztec Wheel spins, the game takes off and Locked Symbols can mean that some decent stacks can build up. You will need this since although the two-way paylines are effective, the number of paylines, at 30, is somewhat limiting.

With a few tweeks, however, the shelf life of this game could be extended. 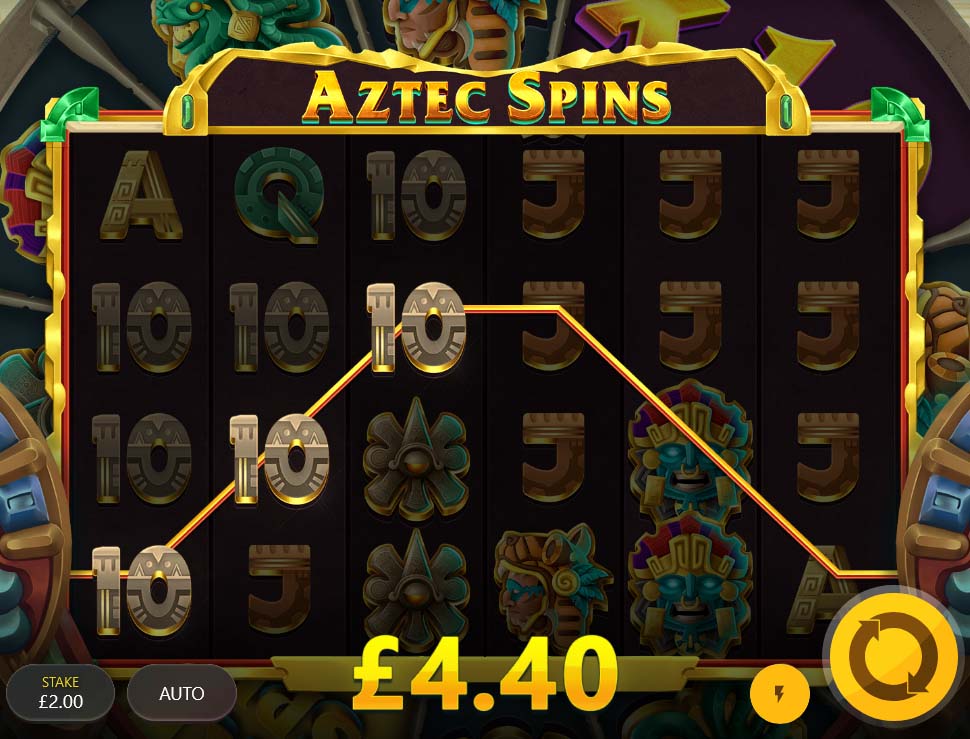 Does Aztec Spins have any special features? The main feature is the Aztec Wheel and it unlocks the riches this game promises. The spins combine with the Locked Symbols and while the winning tiles retain their positions, the outer reels will take you closer to a big win, which the game recognises with the Big Win logo. The multiplier stacker can easily reach the limit of x30 and the frequency of free spins protects your bankroll.
How does Aztec Spins work on a mobile? The game works well on a mobile device, and Aztec Spins does not need an app or an Android .apk file for you to enjoy it. Simply access the game by using your mobile browser.
What is the Aztec Spins RTP? This medium to high volatility game has an RTP of 95.71%.
How do Stacking Multipliers work? Once you have landed stacking multipliers, your next win will receive a 10x bonus, and this can be stacked up to a 30x maximum multiplier.