Gonzo's Quest Megaways is an online pokie developed by Red Tiger. This explorer-themed pokie has up to 117,649 ways to win across six reels. It is a medium- to high-volatility pokie with a 96% RTP. Features include Earthquakes, Avalanches, multipliers, Unbreakable Wilds and free spins. Read our full review below.

You’ve probably heard of the Gonzo's Quest pokie from NetEnt. It’s one of the most iconic games available. Now Red Tiger have combined it with the Megaways format, six reels with a changeable number of ways to win that starts at 64 but can increase to as much as 117,649. As you can imagine, that fills Gonzo’s Quest Megaways with potential even before you get to the multipliers, free spins and other bonus features.

There are nine regular symbols in Gonzo’s Quest Megaways, all themed, and rather than appearing on spinning reels they fall into place as part of the Avalanche feature. Symbols in winnings combinations explode and are replaced, potentially forming new winning lines. There’s also a Wild that can be immune to avalanche explosions and a Free Falls symbol that triggers the equivalent of a free spins feature.

When it comes to Red Tiger Gaming pokies, this one certainly stands out from the crowd, so why not give the free demo a try?

If you’re familiar with the original Gonzo’s Quest pokie, you’ll already have some idea what to expect from the theme of Gonzo’s Quest Megaways. Much like its predecessor, it focuses on the Spanish conquistador Francisco Pizarro González, known for his conquest of the Inca Empire in what is now Peru. The setting is the South American jungle, complete with temple and carvings in the Mesoamerican style, and they’re drawn with vivid and detailed graphics. Gonzo himself is an animated 3D figure at the side of the reels, laughing and dancing as you play, whilst even the soundtrack has jungle drums and birdsong for an immersive experience.

The RTP of 96% offered by Gonzo’s Quest Megaways is good, though not remarkable (and may be lower at some casinos). It’s when it’s combined with this pokie’s other features that you really start seeing the benefits. The volatility leans towards high, so you can see some big single wins spread further apart, but it’s still pretty close to the more balanced medium level.

How to Play Gonzo’s Quest Megaways

When you combine the gameplay from the original Gonzo’s Quest with a Megaways format, this is what you get:

1. Look up in the top right corner of the screen. There’s a little speaker if you want to mute the volume.

2. Next to it is the three-line menu that you can click to open and review the paytable and guide to features.

3. Down at the bottom left is a display for your current stake, with up and down arrows on either side of it. Press the arrows to raise or lower your bet.

4. Moving to the right, there’s a clearly labelled autoplay button. Number of spins and loss limits are compulsory for autoplay, but there are optional controls for a single win limit or to stop when bonuses are triggered.

5. The centre of the screen is a space where your most recent win will be displayed (total balance is at the top left of the screen).

6. One last button to consider before you hit Spin, and that’s Turbo. It’s up to you if you want to use fast mode.

7. The Spin button is the big round one at the far right, and now you’re ready to click it and play.

The betting range of Gonzo’s Quest Megaways is actually quite small, between 0.10 and 4.00. You can still win big, however, partly because of the ability to match symbols six times for the following payouts:

And partly because of the Avalanche Multipliers in both base game and free falls:

When symbols fall into winning positions as part of the Avalanche feature, they explode to be replaced with new symbols and potentially a new winning combination. Every new consecutive avalanche comes with an increased multiplier to make your wins even bigger.

This is a random feature that causes the pokie to shake until all low-paying symbols are destroyed and replaced by high-paying symbols.

When other symbols break during a winning turn, Wilds will remain solid and in place. Only two Unbreakable Wilds will be present on the reels - one on the first three reels and one on the second three.

You wouldn’t think a pokie as popular as Gonzo’s Quest could be improved, but Red Tiger may have just done it with Gonzo’s Quest Megaways. Not only do they take all the best aspects of the original - the basic gameplay, the exciting Avalanche and Free Falls features, the vividly drawn graphics - but they combine it with even more features and the increased ways to win that always accompany a Megaways pokie. This really does combine the best of both worlds. 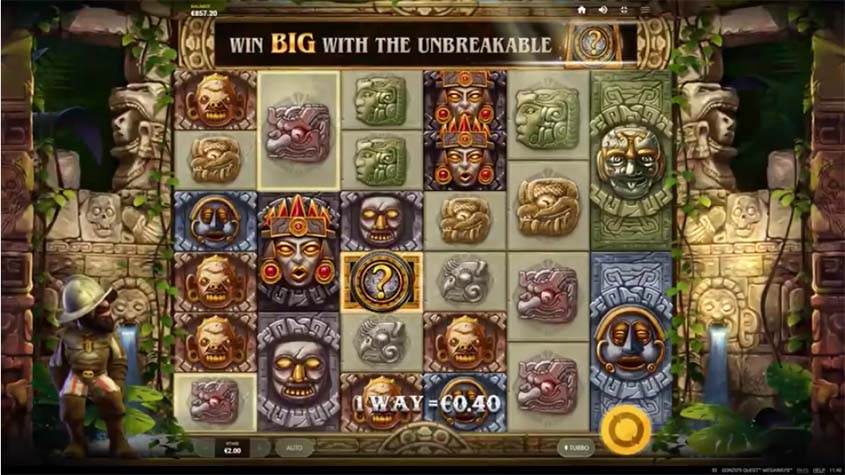 What’s the RTP? The average return is 96%, but it can vary in different casinos, so always check.
How volatile is this game? It has a medium to high volatility, so fairly balanced but leaning towards a few larger wins rather than lots of smaller ones.
What is the biggest win you can achieve in Gonzo’s Quest Megaways? You could win more than x20,000 your stake.
Does Gonzo’s Quest Megaways have a free spins bonus round? There’s a Free Falls feature that functionally works the same as free spins - three or more triggering symbols means nine or more free falls, plus increased multipliers.