You’ll find lavish displays of wealth on the six reels of Piggy Riches Megaways, where up to seven symbols can appear on each reel, giving up to 117,649 Ways to Win with every spin. You’ll find Free Spins, Mega Wilds, Scatters, Cascading Reels and Multipliers galore, all ready and waiting to boost your stake by over 10,000x. But watch out for your bankroll - like all Megaways pokies, this is a highly volatile game, with an RTP of 95.71%. Read our full review below.

If you’re already familiar with the previous game in this series, the original Piggy Riches pokie, you’ll notice that this new, upgraded version features improved graphics as well as a great new Megaways mechanic. All the old familiar symbols of the car keys, the overflowing purse, and the diamond-encrusted playing cards are here on the reels. But now they’ve been given some extra sparkle, showing how Red Tiger Gaming have upped their game since coming under the ownership of the mighty NetEnt.

Piggy Riches Megaways positively sparkles with diamond-studded luxury. Doing away with the former payline structure has given the game the illusion of more space, which ties in with the luxury theme. It’s beautifully designed, staying true to the original while adding some extra pizazz.

How to play Piggy Riches Megaways

Stake just A$0.20 per spin, up to a maximum of A$10.00. This isn’t going to pull in the high rollers, although the high volatility of the game makes it a risky affair for low-stakes players. Keep in mind that high-volatility pokies, such as Piggy Riches Megaways, don’t always pay out enough to even cover your stake. In the case of the playing card symbols, for example, even spinning up six of a kind won't win you back the cost of that winning spin, so keep an eye on your bankroll at all times or stick to playing the game for free while you get to grips with its mechanics.

If you’re playing multiple games at the same stake level, hit the Auto button to bottom left side of your screen. This gives you access to up to 100 automatic spins, and you can set up win and loss amounts to end the feature early. There’s also a Turbo button if you’re in the mood for a fast and furious gaming session. 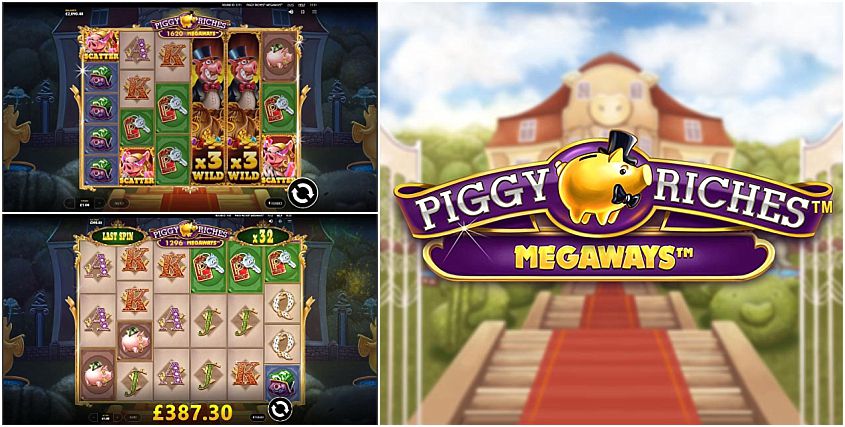 How to win at Piggy Riches Megaways

Matching symbols need to line up on adjacent reels, in any position, with the first instance of the symbol appearing on the first reel furthest to the left of your screen. Match up three or more symbols in this way, and you’ll win the associated cash prize as shown on the game’s paytable. Cascading Reels make the winning symbols disappear from the reels, allowing new ones to drop down. This can create more wins, leading to further cascading reactions - which is where the game’s big winning potential comes into play.

Mr Pig is the game’s Wild. He comes as a Mega Wild symbol, occupying an entire reel. He also comes with Multipliers worth up to 7x attached, and with up to three Mega Wilds potentially appearing with any spin, the cash prizes can really mount up.

Spin up three Mrs Pig Scatters on the reels, and you’ll be awarded a spin of the Bonus Wheel. This could win you up to 22 Free Spins, along with a starting multiplier worth up to 10x. Every subsequent win during the Free Spins bonus round increases the Multiplier by 1x, leading to some big cash awards.

Before you head off to an online casino to spin the reels of Piggy Riches Megaways, make sure you’ve fully explored every aspect of gameplay by trying it out for free. All of the games you’ll find on our site are completely free to play, so once you’ve tried out this one, you could go on to explore some of the other NetEnt pokies online. You could even take your knowledge to an online casino and spin the reels with greater confidence, knowing exactly what to expect from your gaming session.