Robin Hood’s Wild Forest is a 5-reel pokie with 10 paylines from the developer Red Tiger Gaming. It has a 95.68% RTP, low to medium volatility, four wilds, cascades, respins and multipliers. Read our full review below.

Robin Hood’s Wild Forest is a 5x3 pokie with 10 paylines. Red Tiger Gaming have captured the essence of the legendary Robin of Loxley from English folklore in this game, roughly falling within the fairytale and TV and movies themes.

The user interface is minimalistic, with just individual buttons below the reels. To the right is the stake and autospin, and to the right is the main spin button. The top right is where sound and game information can be found.

Symbols include a money pouch, green feathered hat, ale tankards and gold dragon, plus lower-value playing card symbols of 10 through to A.

There are four wilds in this pokie: the red heart, Robin Hood, Little John and Maid Marian. Each will substitute other symbols to help create winning combinations. The famous character trio also trigger features.

It could be said that Robin Hood is a theme of its own given how popular such pokies are. Robin of Loxley and his band of Merry Men hide out in the Sherwood Forest as they evade the antagonist, the greedy Sheriff of Nottingham. Robin Hood was the outlaw hero, a skilled swordsman and archer who’s often seen in Lincoln green. Legend has it that he robbed the rich to give to the poor. This folklore tale dates back to the 12th century, so whether it’s truth or fantasy isn’t fully known.

The aesthetic is quite dark, being set within a corner of a the forest with treasure chests and shiny gold coins littering the ground. The loot is highlighted by slivers of sunlight falling through the trees, and this delicate touch is enhanced by the gentle animations of light and falling leaves. The reels are set in wood, and each symbol is given a woody, rustic twist to fit with the theme. The graphics are softly rendered, and the detail makes it feel like a quality computer game rather than a pokie.

A subdued soundtrack accompanies gameplay to add a sense of mystery and intrigue, with mechanical sound effects for reel spins and wins to give it a modern, fun vibe.

The RTP is estimated at 95.68%, which is just shy of the industry average we like to see at around 96%. It’s also a lower-volatility pokie, so with a low to medium variance, players could anticipate lower or more average wins more regularly than you’d find in a higher-volatility offering.

1. To play, select your stake using the +/- buttons at the bottom left.
2. Once you’re happy with the bet, hit the big gold spin button at the bottom right.
3. Turbo spin and autospin are available if desired, with between 10 and 100 automatic spins possible.

The most valuable base game symbol is the gold dragon, worth 3, 10 and 30 times the wager for three, four or five of a kind respectively. The Wilds are all worth the same in joint place for most valuable.

The bag of gold pays out 15x for five, the cap pays 8x for five, and the lowest-value symbols are the playing card symbols that pay 1.2x to 2x.

Multiple wilds landing on the same free spin can trigger some tempting payouts, with up to 300x the wager per spin.

There are four key features to this pokie:

Maid Marion Wild Feature: Maid Marion will add some random wilds onto the reels after blowing you a kiss, after which an updated payout will be calculated.

Robin Hood Respins: Robin Hood will launch an arrow at the reels when he appears. All matching symbols to the one hit by his arrow will be locked in place for the response that follows, which will continue for as long as there are wilds or new matching symbols gracing the reels.

Multiplier Modifiers: If multiples of the character wilds land on one free spin, you’ll get both modifiers, which will pay out one after the other and could see winnings getting a nice boost.

Little John’s Cascade Bonus: Little John can make a big splash with the cascade feature, getting rid of lower-value symbols for them to be replaced by higher-value ones, after which the payout is recalculated.

The graphics are easy on the eyes, and the atmosphere of this folklore depiction is crafted nicely. It’s simple to play, and minimum wagers at 0.20 coins make it an appealing choice for casual players.

The RTP is a little disappointing, being below that 96% sweet spot we like to see. A lower volatility suggests lower but more regular wins, and there are some decent features on offer to shake things up.

However, many players, especially those looking for bigger wins, may find the base game rather dry and the bonus features somewhat lacklustre, with prizes that aren’t quite worth their time. Nevertheless, there are still some basic wins at a somewhat regular consistency, and the visuals make it entertaining as a casual pokie.

Stay in Sherwood Forest for longer with our Riches of Robin pokie from Play’n GO. This 20-payline offering gives players the chance to scoop up to 10,000x their wager, with free spins, multipliers and a re-spin 1000x jackpot bonus that would make the real Robin Hood jealous. 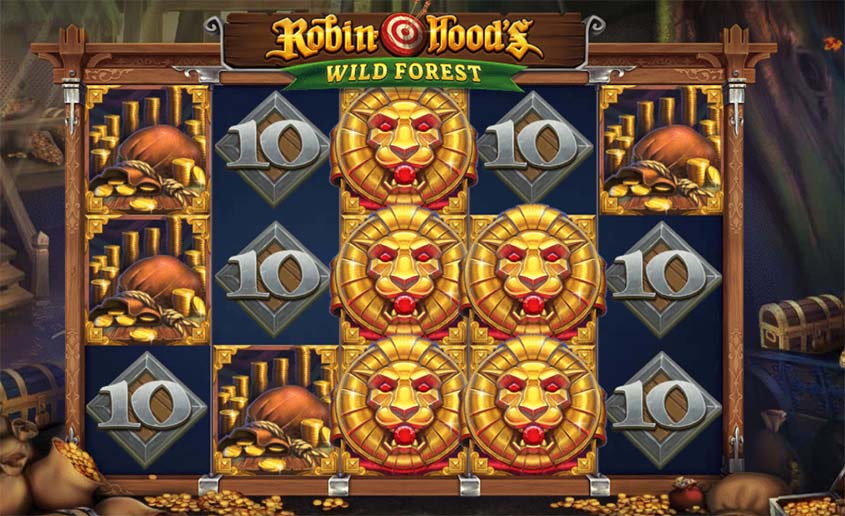