A Night of Mystery is a great online pokie from High 5 Games with gorgeous realistic graphics and 40 generous paylines. There are two bonus rounds available – one is a free spins feature and the other is the Clue Collection bonus during which players match up evidence to earn instant win prizes. Read our full review below.

A Night of Mystery

Indulge your inner detective to uncover the clues and solve a series of murders in A Night of Mystery, a free video pokies game by the prestigious developers at High 5 Games. Packed with features waiting to be discovered, including stacked symbols, Clue Collection bonuses and generous free spins, it is time to dust off your deerstalker and pipe, hit the streets and sleuth your way to the secret prizes hidden within. Time is of the essence!

A Night of Mystery is set on the streets of late Victorian London. A full moon lights the sky, across which the Palace of Westminster is silhouetted, and a gas lamp casts spooky long shadows across the dusky street. The reels look rather low-key against this background; however, the symbols are brightly coloured and artfully drawn.

Players are treated to cinematic and suspenseful sound effects with every spin, including the odd scream of terror from yet another victim. In a nice touch, winning symbols feature animations, guaranteeing hours of entertainment. 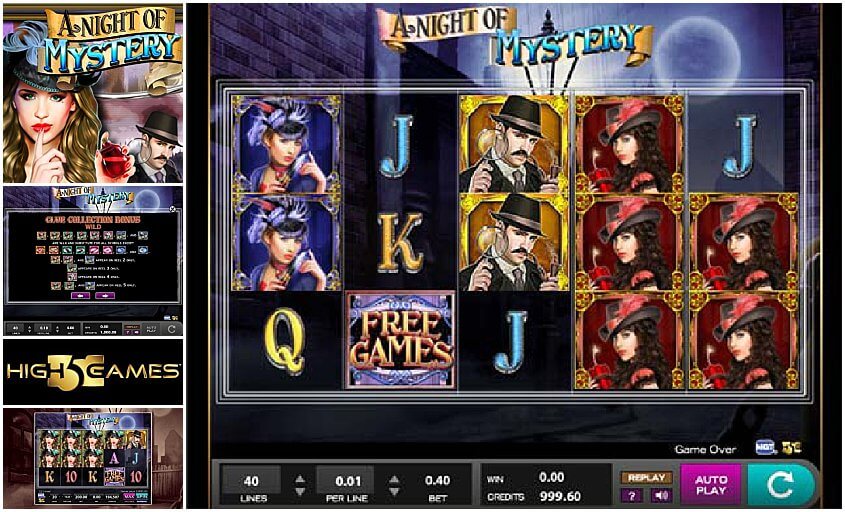 This pokie consists of five reels and a massive 40 paylines. Customisation is possible, with active paylines adjustable from one to 10, 20, 30 or 40 lines. Every type of pokie player is catered to with the options for bet per line ranging from $0.01 to $3.00, giving you a shocking potential maximum bet per spin of $120!

Once you have set up the game to your liking, hit the ‘spin’ button to start the action. As with the old pokie machines in real life, players have the ability to stop the reels whenever they want by hitting the ‘spin’ button a second time.

Sharp-eyed detectives will notice that the symbols in A Night of Mystery are all rather suspicious. The playing card symbols are straightforward enough, from 10 to Ace, with a line of five Aces paying 75 x your line stake; however, the other symbols are female murder suspects. Each woman carries their trademark weapon, from explosives and knives to poisonous perfume.

The most-wanted of the four multiplies your line bet by 250 x if you align all five. The detective figure is the most valuable symbol, awarding prizes of 500 x your stake for a line of five!

The Night of Mystery logo represents the wild in this pokie and substitutes all other regular symbols on the reels, appearing on all reels except the first to help you form more high-paying combinations. The scatter is the Free Games icon, which awards nine free spins and unlocks the Clue Collection bonus round when three icons fall anywhere on the reels.

Your nine free spins are played in the Clue Collection bonus round. These games are played automatically using the same bet and active lines as the spin before; however, they use different reels and symbols, including knives, stained handkerchiefs, lipstick and dynamite - all important clues. The Night of Mystery wild is also present to help you land more winning spins.

Landing matching combinations of a certain symbol on the reels lets you collect that symbol as a clue. Clues are paired; for example, the lipstick and poison perfume are a pair. Collect pairs of clues to win an extra three free spins, with up to 21 free spins available!