Crusader is a 5 reel pokie with 26 to 98 paylines and a Medieval theme. Free spins, respins and full reel nudging wilds plus sticky wild reels give this game huge potential. This high volatility pokie offers the player a 96.1% RTP. Read our full review below.

The Crusades to the Holy Land took place between the 11th and 15th centuries and this Elk Studios game tells the story of one brave crusader off to defend his Christian faith in the Middle East. It’s a beautifully realised game that features Crusader symbolism and a rich jewelled colour palette to evoke this extraordinary period in world history. The Crusader himself is superbly drawn and can extend into a full length figure as the reels expand.

The year is 1291 as Edward I calls on his crusader army to make a final stand to defend the city of Acre against the Mamluks. The yelling hordes and pounding cinematic score grabs you by the scruff of the neck and pulls you into this thrilling pokie packed with gore and glory.

From the moment the reels load you’re immersed in this tale of crusader knights of old on their quest to the Holy Land. The richly detailed graphics and compelling sounds both create an atmosphere that draws the player in and doesn’t let go. Add in the expanding reel gameplay and exciting bonus action and this is a pokie that definitely repays repeated spins. 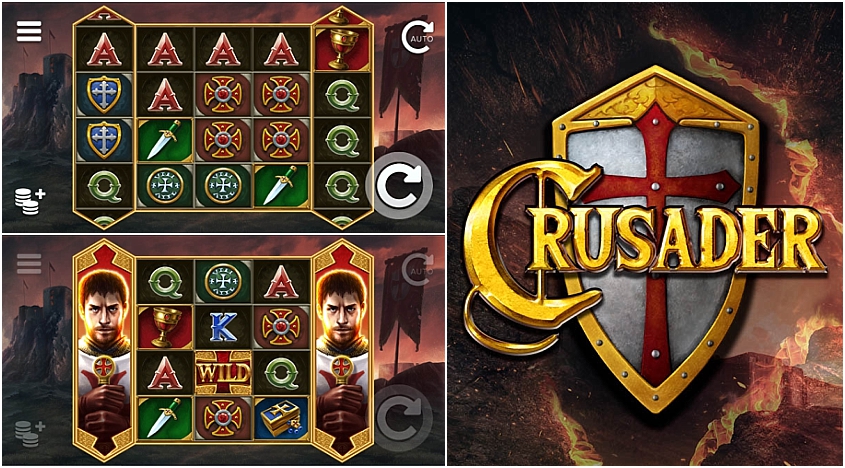 How To Play Crusader Pokies

Before you start playing Crusader take the time to check out the paytable and game settings. ELK Studios pokies include reality check settings so you can play responsibly and a sleek mobile optimised interface that lets you fully customise this absorbing pokie. Spins can be played from between 0.20 to 100.00 credits per spin, or you can choose one of Elk’s four preprogrammed bet strategies which reset after one spin.

There are 9 paytable symbols available in this pokie with the Crusader representing an expanding wild. All wins are paid as multipliers of your line bet with the dagger, chest and chalice paying 4x, 5x and 10x respectively for 5 of a kind. There’s also another red and gold wild in the shape of a cross to look out for which substitutes for every symbol except the red arrow extension symbol which pushes the reels from 4 rows to a maximum 12 with an additional free spin.

What Is The RTP Of Crusader?

Elk Studios rates the volatility of this game at 8/10 making it a high variance pokie. In practice this means that you can expect higher value payouts from this game but you’ll wait through plenty of blank spins before they hit.

How To Win At Crusader Pokie

Like any payline based pokie, Crusader pays out when one or more combos of 3 or more matching symbols land on one of the initial 26 paylines. You can find info on how the paylines pay and play in the paytable.

The available bonuses in Crusader are all fully integrated through the Crusader symbol which is wild and also unlocks respins and free spins when it appears expanded.

Crusader Wild Respins: The Crusader symbol represents 4 wild symbols and appears on reels 1 and 5 only. When this symbol lands partially on the reels, a respin is triggered that nudges the symbol one step upwards or downwards until the symbol is in full view. If the second Crusader appears in full during the respins, it becomes sticky and stays in place until both symbols are fully in view.

Crusader Free Spins: Two Crusaders fully in view trigger 8 free spins. The layout starts at 4 rows and both the Crusaders remain on the reels as sticky wilds throughout. These free spins are played with the Expansion Symbol active.

Expansion Symbol: The red arrow symbol appears on reels 2, 3 and 4 in bonus mode. This triggers a reel expansion of 1 row up to a maximum of 12 rows which expands the maximum number of paylines to 98. In addition you’ll earn an extra free spin every time the Expansion Symbol appears.

Crusader offers players a top win of 250,000 credits which represents 2,500x the maximum available bet. This can theoretically be won on any base game or free spins game but you’ll find wins of this magnitude extremely difficult to land.

Crusader Pokies On Mobile And Tablet

This unusual pokie is available for play on Android and Apple powered gadgets by opening a browser. The mobile optimised interface and pin sharp graphics lend themselves to an HD screen and you can play in portrait mode as the reels expand.

Elk Studios always create exciting games with a strong narrative theme and Crusader is no different, evoking an incredible atmosphere through its sounds and visuals. There’s huge potential in the free spins bonus which isn’t necessarily reflected in the maximum prize and they’re predictably tough to land. But this is another beautifully put together pokie from a studio that loves to innovate. We also recommend their Micro Knights online pokie which is similarly rich with bonus features.

What is the RTP of Crusader? The RTP available from this pokie is an above average 96.1%.
How volatile is Crusader? Elk Studios rate this game at 8/10 making it a high variance pokie.
What is the biggest win available on Crusader? The biggest win available on a single spin is 2,500x your stake.
How often does Crusader pokie pay out? Crusader has a hit rate of 21.2% which means it pays out on around 1 in every 5 spins.
How does the bonus round work in Crusader? The expanded Crusader symbol triggers respins, or activates the free spins feature awarding the player 8 free games. These are played with sticky wilds and the expansion symbols which adds another row and an additional free spin when it appears.
Can I play Crusader for free? Yes you can at Online Pokies 4 U.
Is Crusader legitimate? Crusader was created by Elk Studios who are licensed by the MGA, the UKGC and the GGC. Their games are constantly tested and audited by independent labs to ensure their legitimacy and fairness.