Katmandu Gold is an online pokie developed by ELK Studios. It is a medium to high volatility game with six reels and up to 531,441 ways to win. Based on an adventure travel theme, it includes wilds, scatters, cascading expanding reels and mega symbols. Read our full review below.

Fans of the ELK Studios Gold series of games will be thrilled to discover this fifth instalment, in which Kane the adventurer heads to Katmandu in search of rest and relaxation. He won’t find it, of course - the game is packed with cascading reels, multiplier drops and mega symbols, so he is bound to embark on another treasure quest!

You can always rely on ELK Studios to turn out some excellent pokies, but the team has really excelled itself with Katmandu Gold. This is a stunning game with an arresting soundtrack that makes this feel more like a console game than a pokie!

The RTP of Katmandu Gold is 96.2 per cent, which is slightly above average for an online pokie game. Don’t be tempted to rush off to an online casino too quickly - this game comes withmedium to high volatility, which makes it a risky affair. With games such as this, it is best to try them for free here at Online Pokies 4U before betting your own funds at an online casino.

How to play Katmandu Gold

There is quite a lot to take in when you play Katmandu Gold, so we strongly recommend spending as much time as possible exploring this game in demo mode. Follow our step-by-step guide to make sure you give yourself the best chance of a successful gaming session:

1. Familiarise yourself with the game’s paytable and general guide, which you can access from the hamburger menu in the top left-hand corner of your screen. This will take you directly to a run-through of the game’s features and symbol payouts.

2. At the base of the paytable screens are icons directing you to the game rules and settings. Here, you can adjust the game sounds and speed up the gameplay with turbo mode.

3. Returning to the main gaming screen, it is time to set your gaming budget. Ideally, you will need to play at least 200 spins, although even this might not get you far if the reels align against you. Be strict about your spending and don’t be tempted to chase wins or losses.

4. Now that you have divided your budget, you can set the cost of each spin by tapping the coin icon next to the reels.

You can spin the reels of Katmandu Gold from as little as 0.20, rising to a maximum stake of 100.00 per game. Match three, four, five or six symbols on adjacent reels, starting from the leftmost reel, to win prizes paid as multiples of your total stake:

Katmandu Gold is positively packed with bonus features, starting with the popular avalanche wins, also known as cascading reels. Winning symbols disappear from the reels, allowing new ones to drop to fill the spaces. In this game, each cascade generates an extra row of symbols, giving even more winning opportunities!

The game starts in a 6x4 format with 4,096 ways to win; however, with the right winning combinations in place, it is possible to extend this to nine rows of symbols and 531,441 ways to win. There is a wild substitution symbol to help you achieve winning combos, and any symbol can appear as a super, mega or epic symbol occupying up to 4x4 spaces on the grid.

Look out for symbols with an arrow shape pointing either up or down, or both. When this features in a winning combination, it expands the symbol in the direction of the arrow, potentially creating extra wins.

Two or more yin yang symbols on the reels will initiate the Ice Climber bonus feature. This symbol and all those above it will switch to any winning symbols, which could lead to some extra payouts.

Land at least three bonus symbols to activate the Multiplier Free Drops round. This takes you through the playing grid to the doors behind, which open to reveal Katmandu and a new set of reels. You will receive up to 25 free spins, during which every new bonus symbol adds to the increasing multiplier shown to the right of the reels.

We have enjoyed playing all the previous pokies in the Gold series from ELK Studios, but Katmandu Gold is far and away the best. Outstanding graphics and an immersive soundtrack combine with some thrilling gameplay to produce some genuine next-level pokie gaming.

The Ice Climber and cascading expanding wins add layers of interest to the game, not to mention some exceptional winning opportunities. You will need to play for a while to reap the full benefits, however, as it took us at least 100 spins to generate the Multiplier Free Drops bonus, which is where we made up for our previous losses. Play it safe and explore the game in demo mode before wagering your own money. 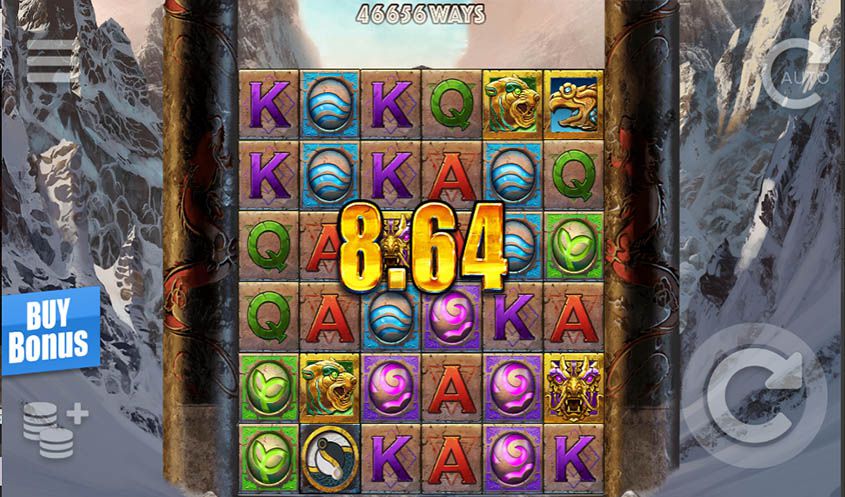