If you like pokies with a twist, you’ll absolutely love this game by ELK Studios. Knights the characters may be, but it's probably not how you’d envisaged them - unless, of course, you’d pictured them running around saving little girls’ bunny rabbits or catching frogs from an enchanted forest. Yes, you could say that this game is a mix of genres! But while it doesn’t paint a bloody battle scene, this pokie is intricately designed and leaves you wanting more. You won't walk away untouched by this game! Not only does it look wacky and wonderful, but it is also jam-packed with features and numerous ways to grab yourself win after win. All the add-ons make the action enjoyable and surprising each and every time, plus the gameplay is extremely fast so you’ll never ever get bored of playing Micro Knights. Plus, it's relatively easy to get the bigger wins, which is a bonus in itself. You can enjoy this free pokies game right here at Online Pokies 4U and get in on the action any time you choose! Created by game makers ELK studios, this game has been optimised for enjoyment on all platforms and can be played on desktop, mobile and tablet. The game's fantastic design with bright colours and bubbly characters make it instantly appealing, and players can have fun any time, anywhere! Read our full review below.

Micro Knights is a brilliant game by ELK pokies (not to be confused with WMS' Black Knight pokie online) that anyone can enjoy, whether new or experienced. The animated medieval pokie is vivid and entertaining, so it will draw you in instantly!

On the reels are a number of woodland symbols, such as cute bunny rabbits, charming little tree frogs, picturesque toadstools and quaint water wells. But let’s not get too concerned with all of the fairytale features as there are also some more menacing creatures to see, too, like a bull and a dragon. Not to mention the fact that the knights charge around making fire trails or smashing icons up as they pass them.

The game is set on the grounds of a castle surrounded by trees as far as the eye can see, but the dragon and funny little knights save the pokie from being too childish. Also, you may notice that the grid is tiny, taking up a small section of the expanding forest from a birds-eye view, as though you are looking at a spot on a treasure map. This all adds to setting the scene of a medieval, fantasy storyline.

How to Play Micro Knights

The historical game Micro Knights is played on a 7x7 grid, with up to six flag features to trigger. Flags remove rows and low-value symbols and add wilds and super-sized symbols, so there always seems to be something going on. The wild is represented by a gold goblet and substitutes all other symbols except the bonus scatter. On top of that, there is a Free Drops Bonus Game Feature.

Micro Knights is a Cluster Plays pokie, which means that you get winning combinations by landing five or more matching symbols connected either vertically or horizontally. With every win, you'll see an avalanche race down your screen that will remove the winning clusters and replace them with new symbols. These new symbols could lead to even more new wins as you continue paying Micro Knights!

The queue system works from left to right and groups the same type of symbols together when there are no winning combinations. The Charging Knight indicates whether a row has symbols up for grabs or not. Symbols can remain in the queue until they form part of a winning cluster or can be the making of multiple clusters in the same drop.

Each time a winning cluster is formed, the symbols are added to the right side of the grid, where you'll see a meter. Once full, a flag is selected at random and the meter resets itself. Among the six flag features are: 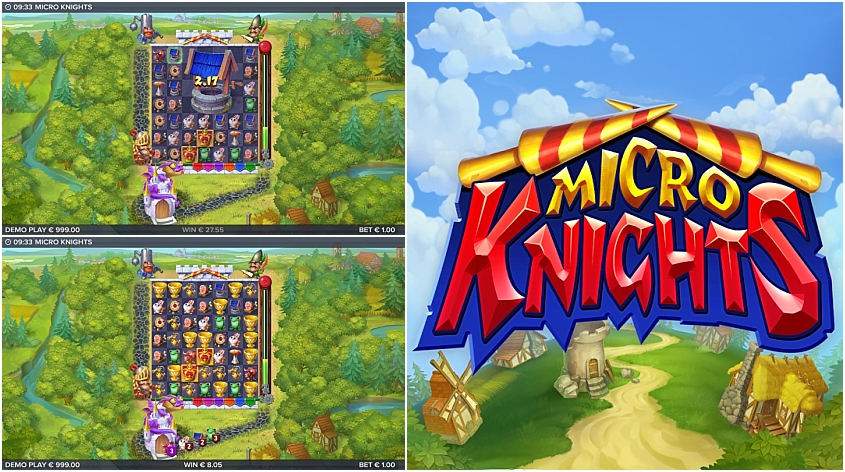 Micro Knights boasts a Free Drops Bonus Game Feature, during which a bonus scatter in the form of a crown will start the exciting add-on. Get three of them to see this game start, and grab yourself five free drops or spins. You can then retrigger the special feature, gaining 10 in total.

The most rewarding symbol on the Micro Knights grid is the raging bull. The game has a high RTP of 96%, so you can win up to 2,500 times your stake with every spin of the reels.

Created by game makers ELK studios, this pokie has been optimised for enjoyment on all platforms and can be played on desktop, tablet or mobile. Thank goodness for such high-quality screens on small devices such as mobile phones because this pokie features a smaller-than-normal grid that is crystal clear however you choose to look at it!

You can enjoy this free pokies game right here at Online Pokies 4U and get in on the action any time you choose! You can also play for free, with no need to make a cash deposit. All you need to do is sign up for an account and get spinning!