Pirate Gold Deluxe is one of the Pragmatic Play pokies available to play at Online Pokies 4U. It has an RTP of 96.48% and a high volatility factor. Players can enjoy a layout of five reels and 40 paylines to use. Bonus features in the game include the Lucky Treasure Bag, wild symbols and a Buy Money Re-Spins option. Read our full review below.

Get ready to sail the high seas in one of Pragmatic Play’s pokies with Pirate Gold Deluxe. With five reels and 40 active paylines to use there’s plenty of potential for treasure rewards. As a sequel to the original Pirate Gold game, this pokie has brighter visuals but offers up a weaker max jackpot than the base game.

Because Pirate Gold Deluxe is based on another game it uses all of the same symbols and graphics in its pirate theme as the original. This one is a bit brighter, but you’ll still see the old staples of oceans, treasure and sailing ships that match the theme. It’s a good-quality design which we’re used to seeing from the developer.

While Pirate Gold Deluxe may fall short in a lot of areas, players may be pleased to find out that the RTP is good and above the average for online pokies. It’s set at 96.48%, so players have more of a chance of getting their money back than they do in the original game. In terms of variance it’s been rated a five out of five on the high volatility scale, so there are a lot of risks involved if you plan on sailing the seven seas for real money.

How to Play Pirate Gold Deluxe

The controls for Pirate Gold Deluxe are exactly the same as any other Pragmatic Play pokie. If you’ve never played one of their titles before, you can find out what controls you will need to learn below.

1.    Click the plus or minus buttons to change your bet value and open up the bet menu.
2.    The hamburger menu opens up the settings menu, which contains settings which affect the way the game is played.
3.    The I button opens up the information page.
4.    Your credit and bet labels show the current balance and current total bet.
5.    The spin button starts the game.
6.    The autoplay button opens up the autospin menu.

The full range of bets for Pirate Gold Deluxe starts out from $0.20 per spin and goes up to $100. When it comes to the paytable the game relies heavily on the bonus features for the bigger payouts, where you can win the maximum jackpot of a 15,000x multiplier. Regular spins will get you a maximum of a 500x multiplier.

There are a whole host of pirate-themed symbols which you will need to land in combinations of threes, fours and fives to get a cash prize. Below are the multipliers for each symbol if you manage to land five across a payline.

The treasure chest wild symbol can land on the second, third, fourth and fifth reels in the game. It can also substitute for all other symbols in the game apart from the bonus icon, helping create more winning combinations.

Landing eight or more of the golden money bag symbols on the reels will trigger the Lucky Treasure Bag feature. Here the money bags will lock in place and then give you three respins, and each bag is assigned a random value of coins which you will have a chance to win soon. Every time you land another money bag, you will receive an additional three respins.

During your respins the symbols on the reels are replaced by different coloured money bag icons. These can offer up different rewards which we’ve detailed below.

•    Purple bag - Collects the monetary value attached to any gold money bags that triggered the feature.
•    Red bag - Collects the money from all of the bags that are currently on the screen.
•    Green bag - Awards a multiplier of 2x, 3x or 5x your original bet. Multipliers can also accumulate and will be applied to your total winnings at the end of the round.
•    Treasure chest - Awards you with a retrigger. Once your current round of respins has finished, you will start over again with the same number of gold money bags that you landed to trigger the feature.
•    Jackpots - Landing the mini or minor jackpot symbols during the feature will reward you with the associated prize - either 50x or 200x your stake. If you manage to fill the entire screen with jackpot symbols during the round, you will receive the grand jackpot, which is worth 1000x your stake.

If you don’t want to hang around for eight of the money bag symbols to pop up, then you can use the Buy Money Respins option to activate the feature for you. You will need to pay 100x your stake to trigger it.

Although the graphics have been updated from the original, Pirate Gold Deluxe did not live up to our expectations. With the lack of free spins and bonus features and a maximum jackpot that has been more than halved compared to the original, we were a bit disappointed with this pokie. 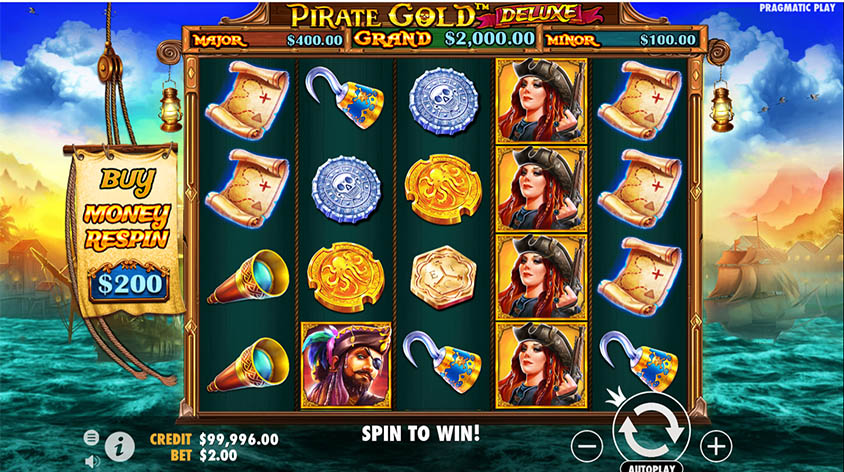 What is the maximum win in Pirate Gold Deluxe? You can win up to 15,000x your total stake in the Lucky Treasure Bag round.
Are there free spins in this pokie? No, there aren’t any free spins in this game. The only real bonus feature is the Lucky Treasure Bag bonus round.
Is this a jackpot pokie? While it doesn’t have a progressive jackpot, there are jackpot prizes available during the bonus feature.