Gems Bonanza is an online pokie developed by Pragmatic Play. It has 20 paylines and 8x8 reels. The RTP is 96.55 per cent and the game has high volatility. Bonus features include the tumble feature, the gold fever progressive feature, and the buy option. Read our full review below.

Pragmatic Play is taking you on a magic trip to the treasure-laden forests of South America with Gems Bonanza. Players are cast into the darkest night to search for shiny and colourful gems. The Aztec gods have bought a brand-new hearth to smith their gems and are ready to reward players with the biggest wins. The bellows are ready to blast all players of online pokies with potential wins.

Gems Bonanza is an online pokie played on an 8x8-reel grid, with gems disappearing from the screen with a tumble. Special cells feature a mark that can trigger one of the five spin features. The game has 20 paylines, high volatility and an RTP of 96.55 per cent, which is higher than average.

The maximum potential win on this pokie is 10,000x the stake. The Pragmatic Play tumble feature is part of this pokie. Other bonus features include larger symbols on the reels and transforming random symbols into wilds. Symbols pay in blocks of a minimum of five of a kind that form combinations horizontally and vertically.

Gems Bonanza is available to play as a free demo here at Online Pokies 4U. Trying the demo is recommended for new players; in this way, they can learn the game mechanics before deciding whether to play for real money at an online casino.

Modern pokie features and ancient Mesoamerican art go hand in hand in this game. Gems Bonanza features a stone hearth with an Aztec symbol where the gold is melted and a mysterious round fountain with the face of a god where five colourful gems sit. This is the gold fever meter that will be discussed in the bonus features section.

When players land winning symbols, a flash of light crosses the screen and lights up one of the mysterious gems. This pokie brings a sparkle of Aztec mysticism and is really quite beautiful. The graphics are full of careful details that feel truly immersive.

The pokie has a RTP of 96.55 per cent, which is higher than industry average. Gems Bonanza is a high volatility pokie.

How to play Gems Bonanza

1. When the game loads, players should read through the paytables. These can be found by clicking the 'i' button at the bottom of the screen.

3. Hit the + and - buttons to increase or decrease the bet.

4. The sound effects can be controlled in the main game menu.

5. Autoplay can be set from 10 to 100 spins. There are stop loss and win limits, which is a good feature for responsible gameplay.

6. Set a budget for the session, press play, and enjoy the game.

All symbols pay out for blocks of a minimum of five symbols connected horizontally or vertically. The maximum payouts for 25+ symbols are as follows:

The green gem in gold is the wild card. This substitutes for all other symbols in the game to make a win more likely. The wild can be used to connect and form multiple win combinations on the grid.

Each time a winning combination is formed, the symbols involved will disappear to make room for new symbols to tumble onto the reels and potentially create new winning combinations. The tumble will continue as long as there are wins to be formed.

The base game contains coloured markings that can appear on the grid behind any regular symbol. Each time a win is formed, a special feature will be triggered depending on the marking colour:

Blue will clear all symbols from the grid.
Pink will transform a random symbol on the grid into a wild card.
Yellow will award 2x2 block symbols in random positions.
Red will turn symbols into blocks of 3x4, 4x4 or 5x5.
Green will add between 5 and 15 wilds to the reels.

With each spin, symbols will add to the gold fever meter. When this is full, gold fever will begin and players will advance through levels of multipliers. Players can benefit from 2x, 4x, 6x, 8x and 10x multipliers.

Gems Bonanza is an action-packed pokie that is not for the faint of heart. There is a colossal potential win of 10,000x the stake, but this is a highly volatile pokie. There is a high RTP of 96.55 per cent and the game is full of exciting bonus features. The gameplay has a nice flow and the game is visually striking and stands out from the crowd. Once again, Pragmatic Play has pulled a fascinating pokie out of the bag with highly engaging and potentially rewarding gameplay. It might take time to get used to the unusual block symbols and the tumble feature, but new and experienced players alike will enjoy this pokie. 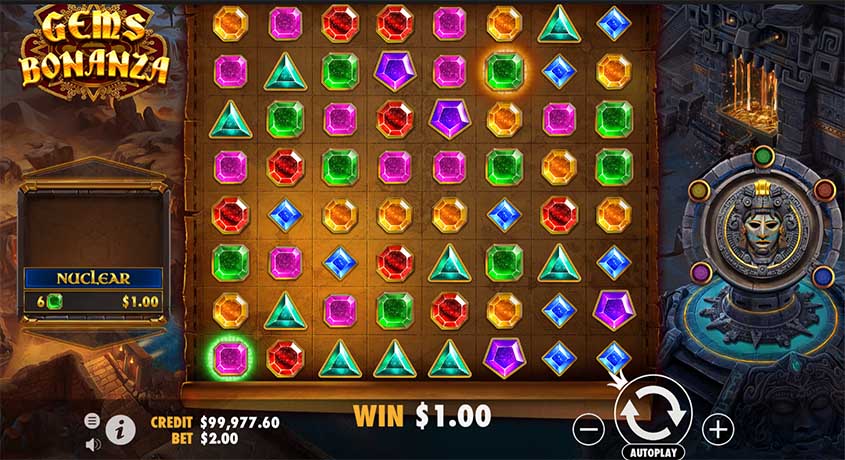