Drago Jewels of Fortune is an online video pokie from the game maker Pragmatic Play. It has five reels with 1600 ways to win, an RTP of 96.05 per cent, and a dungeons and dragons theme. Read our full review below.

The pokie is set in a dark and dingy cavern with an array of treasure and coins being guarded over by a purple swaying dragon, who we assume is Drago.

The grid is an unusual one, with five reels set up in a 5-4-4-4-5 configuration; the first and fifth reels both have an extra row encased in gold-coloured frames at each corner.

Players can set the reels going from as little as 20c up to $100 a spin. Symbols include x9 basic ones, a wild and a bonus feature.
The wild symbol appears on reels 2, 3 or 4 and acts as a substitute for all others, apart from the bonus symbol.

In our intro, we mentioned the first and fifth reels both have an extra row encased in gold-coloured frames at each corner. It’s these four corners that are at the heart of the game. Dependent on the icons that appear in them, gamers can trigger free spins, or, even better, Dragon Super Spins! The latter is activated if a player is lucky enough to land on x4 matching dragons in all of the x4 corners.

During the super spins feature, it is only the triggering icon that appears on the reels. When this happens, it locks into place for the entire round. When no more new dragon icons appear, the round comes to an end. The game then calculates the amount of symbols collected and an appropriate prize is awarded. And there’s more! During the feature, there is also the possibility of an upgrade symbol landing. If this happens, all the paytable winnings are doubled. Here’s how it looks in practice:
X2 yellow dragons = x100 the bet
X4 green dragons = x250 the bet
X5 red dragons = x500 the bet
X10 pink dragons = x5000 the bet

Once the re-spins finish, the symbols are transferred over to the free spins bonus and sit in the x4 corners of the reels.

The game also has a bonus buy option that costs 100 times the bet to trigger; be aware that the RTP is disabled during this feature.

The default RTP - or Return to Player - is an above-average 96.05 per cent, and it has been classed as highly volatile with a score of 4.5 out of 5.

Indeed, Pragmatic Play is ahead of the curve when it comes to communicating with its customers; the game has its own volatility meter that allows players to know exactly what they will be faced with before they press the play button.

The good news about Drago Jewels of Fortune is that there are a greater number of ways to win prizes compared to other similar pokies. Winning combos must appear left to right, which is fairly standard practice, and are triggered when x3 or more of the same symbols appear at any one time. Fabulously, there are 1600 ways to win!

The regular symbols are five vibrant 10-A royals. Then, there are the top-notch symbols including Drago the dragon, who is the most valuable of all the game’s symbols.

Dragon action is the theme of Drago Jewels of Fortune, with visuals that are nothing short of striking. It has a cartoon feel about it.
The soundtrack is both powerful and fantastical and adds to the atmosphere.

How to play Drago Jewels of Fortune

Here are some top tips to ensure you enjoy the game:
1.    It’s a highly volatile game, which means that the potential is also high; this will appeal more to experienced gamers who like to take a chance.
2.    The features seem to appear fairly regularly, which keeps gameplay fresh and exciting.
3.    The wins are certainly enticing. For example, you can win x10,000 during the Dragon Super Spins if you land on x20 or more purple dragons.

We were impressed with Drago Jewels of Fortune; its unusual reel formation was a definite plus and certainly kept us on our toes. The gameplay is exciting, with very real opportunities to receive some sizeable payouts. Watch out for the dragon fire, though!

If you like Drago Jewels of Fortune, you will enjoy other Pragmatic Play online pokies. Why not give Dragons Mystery pokie a spin today? 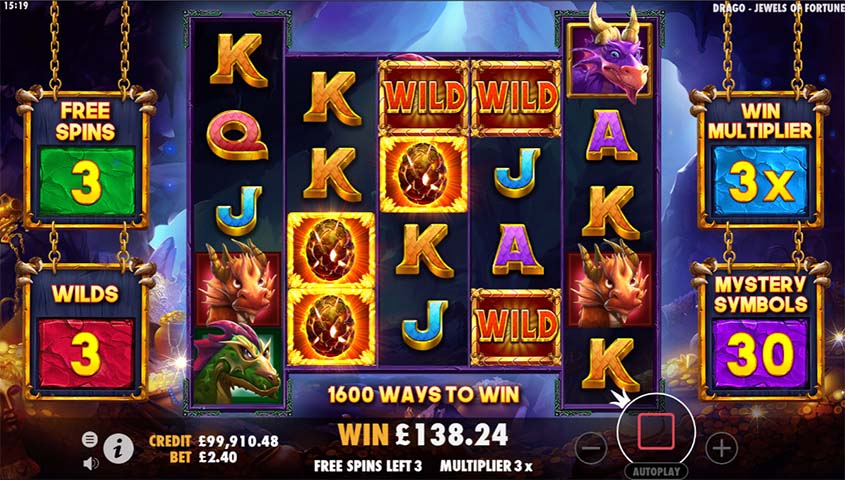 Who is the game provider? The game provider is the well-known and established Pragmatic Play.
How many reels does the game have? The game has an unusual reel formation of 5-4-4-4-5; this pattern is rarely seen in the gaming world and adds a bit of edge to the whole gaming experience.
How many rows are there? Drago Jewels of Fortune has gone for the traditional x3 rows.
How many paylines doe the game have? An impressive 1600!
What is the game’s maximum payout? This stands at x48,000.
What are the minimum and maximum bets? The minimum bet is 0.20, rising to a maximum of 100.
When was the game released? The game was released on 9 July 2020.