Vegas Magic is an online pokie from Pragmatic Play with an exciting magician theme. This energetic pokie is brightly coloured, with neon pink and blue shades and sparkling lights, while fun music plays throughout in the background. There are 20 paylines and five reels for a standard layout, making it easy to get started. Features here include tumbling reels, which potentially let you win multiple payouts from one spin. Read our full review below.

This fun pokie game also includes various interesting bonus features, such as wild symbols and scatter symbols, along with big multiplier rewards and the popular tumbling reels feature. This is just one of the exciting Pragmatic Play pokies we have here at Online Pokies 4U that are available to play on mobile and tablet in addition to your PC.

The symbols in this Vegas Magic pokie are inspired by the traditional magic acts of the 1970s. There are the male magician and his female assistant, along with a golden tiger, white dove and top hat. There are also some lower paying symbols to add to the mix. In the background, you will hear exciting music playing that has a magical touch, while the imagery includes purple and pink colours, sparkling white spotlights, and electric charges.

Vegas Magic has five reels and 20 paylines, giving a regular set up that all pokie lovers will recognise. You can choose your own betting level for the game by changing the coins in play from one to a maximum of 10, along with the coin value that can be from 0.01 up to 0.50 per coin. Finally, you can use the total bet plus and minus buttons to alter your overall bet per spin, which starts at just 0.20 and goes up to 100.00 per spin. This wide betting range makes the game suitable for all players, from the low rollers to the high rollers. There are various other options that can be used to add more entertainment to the game. These include an autoplay feature, a volume control, an information button, and a settings screen. The latter lets you make other changes, such as altering the spin speed. You can easily see the potential payouts by opening the paytable from the info button to display all the symbols and their potential rewards. 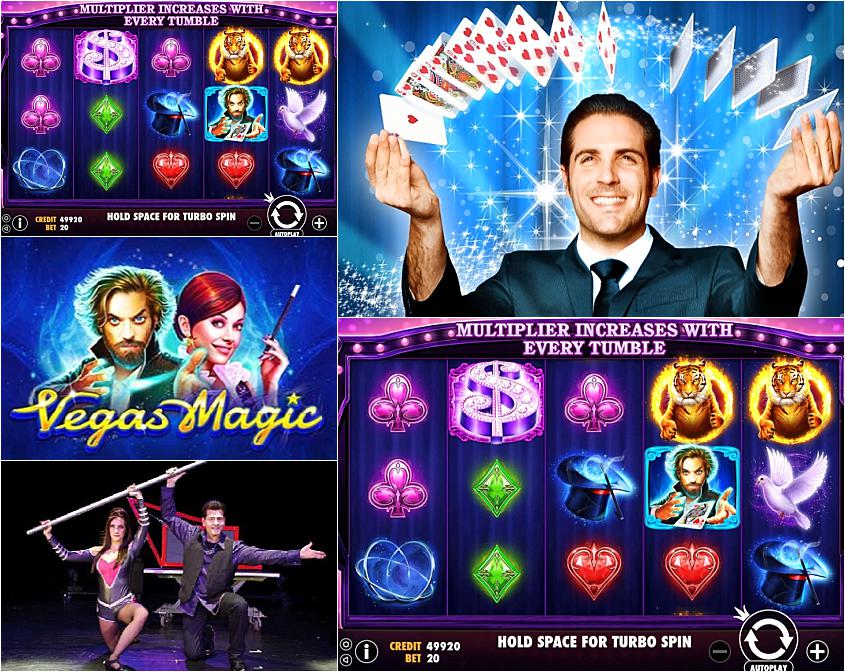 The most lucrative regular symbol in this game is the purple dollar sign, which can pay you up to 50,000 if you manage to hit five matches on the screen at the same time. This is also the scatter symbol, so it can pay anywhere it lands without needing to hit along a payline. Next along the paytable is the female assistant, who can award up to 15,000 if you find five matches on the reels along an active payline. Third in line for payouts is the golden tiger, which can award 1,250 for five symbols, followed by the white dove, which can give you 1,250 for five symbols. You need to land at least two of the female assistant symbols or three of the other symbols to trigger a payout while playing this pokie.

The wild symbol for the game is the male magician, who can appear on reels two, three and four and substitute for all other symbols in the game except for the scatter. This special symbol can also expand on the reels to fill the entire reel whenever you enjoy a winning spin. While expanded, it can make even more substitutions. Another special feature is the tumbling reels feature, which is always popular with players. This works in effect a little like online pokies free spins to give potentially more spins for the price of one whenever you hit a win. Tumbling reels are highly lucrative, as the winning symbols disappear to be replaced by new symbols whenever you hit a winning combination, potentially giving you more winning combinations! You can also enjoy an added multiplier reward on every tumble of the reels, starting at 2x and going up potentially forever with no limit on the number of tumbles or the size of the multiplier!

Who will enjoy playing Vegas Magic?

Players who like magic-inspired themes are going to love playing Vegas Magic, especially if the old-school glamour of magic acts appeals. This pokie has a great atmosphere due to all the colours and music in the background, which really adds to the theme and fun. It also has a Vegas vibe due to the bright lights and music. The features are also important here, with the tumbling reels making a huge difference to your winning potential, as do the multiplier rewards. Wild symbols appear regularly and the scatters are also high paying, with up to 50,000 available for a big win. This game should tick lots of boxes for pokie fans.

Players who enjoy playing Vegas Magic are bound to like some other similar pokie titles. One good example is Caishen's Gold pokie, a Chinese themed pokie that features lots of winning opportunities thanks to the amazing bonus game. The fixed jackpots come into their own during this bonus feature, which let you pick from four options to win up to 1,000x your bet! This pokie also uses the 243 ways to win feature rather than regular paylines, giving a huge number of winning chances on every spin.

Vegas Magic by Pragmatic Play is a great pokie for players who love classic magic themes and a dose of glamorous Vegas style. The background colours of pink, purple, blue and white give this a glitzy feel, while the music playing during the game builds on every spin to add to the excitement and anticipation. With a standard layout, this is a simple game to get started with, while the bonus features such as the tumbling reels and multipliers make it possible for anyone to win large amounts - even lower rollers. Vegas Magic has a magical feel and if you love tumbling reels, this will be perfect for you!