A visually stunning and unique offering from Pragmatic Play, this pokie is set on five reels, 20 paylines and three rows. Looking beyond the setup, this online pokie game is absolutely chock full of thrilling bonus features. We will be covering all of the best parts of this game in our online review. Read our full review below.

There are various Greek-themed symbols featured in this pokie, very similar to the Hercules Son of Zeus pokie. Many of the wins will revolve around the standard royal logos that represent the low-value symbols within the game. It is typical of online Pragmatic Play pokies to use the card symbols in their offerings. The higher paying symbols fit in with the Greek God theme of the pokie and include harps, pots and temples, all with stunning graphic quality.

What is the RTP of Hercules and Pegasus pokie?

This pokie has a 96.5 per cent RTP and medium volatility, which is above the average for online games of this calibre. Having this combination of winning possibilities means there are bigger and more lucrative amounts of money to walk away with if you manage to match the right symbols on the reels. 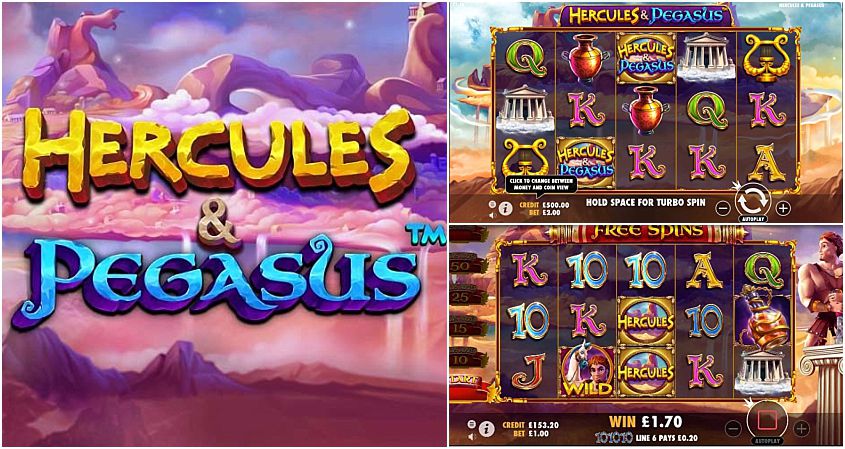 The base gameplay is further enhanced by three scrolls that appear on the screen. Each scroll will hover over the reels and will offer one of the triggered features below randomly:

- Pegasus wild. When you next take a spin, Pegasus wilds will be sprinkled on the reels. If you hit winning combinations, a 2x multiplier will be activated.
- Hercules wild. On the next round, Hercules wilds will appear on the reels instead of regular symbols.
- Bolt of Zeus. Stacked Zeus reels will be randomly picked and appear on the paylines. When the reels stop on this stack, they become random symbols, which can help you to win bigger prizes.

There are various free spins available on Hercules and Pegasus pokie, which are detailed below:

- Hercules free spins. When you get both the Hercules bonus symbol and the standard bonus symbol on the first and third reels, this will trigger the Hercules free spins. You can win an unlimited number of free spins in this round. There is also a bonus for every red potion bottle that appears on the reels, with extra wilds awarded that will pay out multipliers from 1x to 5x. If a red potion bottle appears on the fifth reel, the free spins round will come to an end.

- Hercules and Pegasus free spins. This is the mega free spins round that every player should be crossing their fingers and hoping for. When the bonus symbol comes up on the first and third reels along with the Hercules and Pegasus symbols on the fifth, this triggers the big free spins feature. You can be awarded an infinite number of free spins here. The red potion bottle will add an extra Hercules wild to the game. The blue potion multiplies your stake by 1x to 5x each time it appears. If the bottle appears for the fifth time, the feature will end.

Hercules and Pegasus pokie on mobile and tablet

As you would expect from a pokie from Pragmatic Play, this game has been fully customised to work on tablet and mobile devices. The gameplay and graphics are not compromised when playing on mobiles and you can play on any smart device, such as your iPhone, Android or tablet.

There is a lot to keep an eye on with this pokie and it is definitely a challenging play. The key to getting big wins is to trigger the free spins rounds within the game. These are relatively uncapped, so they have the potential to let the wins rack up quite significantly. As for the mythology theme, this is a good take on it but there are definitely better options to be played out there.