Emerald King is an online pokie created by developer Pragmatic Play. This title has long term RTP of 96.51% and high volatility. Read our full review below.

Will you have the luck of the Irish as you take on the Emerald King in this new online pokie from the folks at Pragmatic Play. Try to save the emerald lands in support of its king in this vibrantly coloured five reel, three row pokie. Emerald King has 20 always-on paylines to allow for multiple wins to be achieved per spin.

Symbols include the classic fruit machine stalwarts such as cherries and grapes as well as the eponymous Emerald King. Playing card symbols make up the rest of the game board, from 10 to K. Watch out for the shamrock in the top left-hand corner of the screen. On random spins, the shamrock dips down onto the screen, turning random spaces on the reels into wilds. At the same time, keep your eye on the lucky horseshoes which appear periodically at the bottom of the reels. These turn the reels green, and if all reels turn green the bonus feature is triggered.

Each time the wild pot of gold appears on the reels, a coin is added to the pot at the top of the reels, which will occasionally fire a set of random wild symbols onto the reels.

Fans of free online pokies will be glad to know that Pragmatic Play have made this game available for free demo play. This gives you the opportunity to check out the gameplay and see if it is worth staking money on a spin of the reels.

Set amongst a rather snow capped and mountainous 'Ireland', Emerald King features the charming castle of this King in its foreground. Definitely set in a fantasy realm, the king himself bears more resemblance to your stereotypical Leprechaun than any real or imagined ruler from past or present.

Graphics are smartly rendered, with colourful symbols contrasting beautifully against the black reels. The all important green reels show up very well against this backdrop, helping players to keep track on their progress towards the next bonus trigger.

Animations are very smooth, making the game look premium, despite the cartoon based graphics. There is a satisfying 'bounce' to the reels when they stop spinning, bringing to mind a physical pokie. These little touches show great attention to detail, making the gaming experience that little bit better.

Music is generally speaking a little bit of background noise, with the sound effects taking the most prominent part of the mix. There are some lovely little jingles played when the wild coins fall from the pot of gold at the top of the screen as well as when big wins are achieved, but again these fall into the old genial Irish stereotypes that the representation of the Emerald King suffers from.

This online pokie has slightly above average RTP of 96.51%, and high variance. This means that big wins are definitely possible, but they will take a good deal of patient play to be achieved.

How to Play Emerald King

1. It's always a good idea to take a look at the paytable when starting on a new online pokie for the first time. The paytable shows the wins that can be achieved when different combinations of symbols appear on the screen. Also revealed in the paytable is information about accessing features and other game rules. The paytable in Emerald King is opened by clicking the 'i' button at the bottom left of the reels.

2. The bet size can be changed by clicking the plus and minus buttons at the bottom right of the screen. Bets can be amended on a number of fronts, including the number of coins per line as well as the amount each coin is worth. A neat feature is that the total bet can be adjusted, with other elements recalculating according to your preference.

3. Emerald King has a very detailed set of autoplay options, allowing players to customise to a great degree how they wish the reels to be triggered. Autoplay can be set to stop following a number of spins, up to a maximum of 100, as well as asked to stop if the feature is activated, or a set amount of money has been lost or won.

4. If you are happy with all game settings and wish to set the reels off manually, click the monkey button at the bottom right of the screen.

5. It is vital to play Emerald King responsibly. Ensure you set a budget for each gaming session, and walk away from the game if you are not finding it fun anymore.

The minimum bet in Emerald King is $0.20 per spin. This is achieved when one coin is staked on each payline, with the value of coins set at $0.01.

The most powerful symbol in the game is the Emerald King himself, paying out 500x the line bet if 5 are revealed on a payline.

At any point, the shamrock can send random symbols wild, providing a great chance for wins. Similarly, the pot of gold at the top of the reels can shower golden wilds onto the screen, upping your win potential.

To enter the bonus mini pokies feature, all 5 reels must turn green. Once the mini pokies are open, up to 15 mini pokies can appear on the screen. These three reel, single row miniature pokies will keep spinning while they're winning, only stopping when they land on a non-winning combination.

This is a great looking game, even if a touch stereotypical. The bonus features can trigger at any time, making each spin interesting. 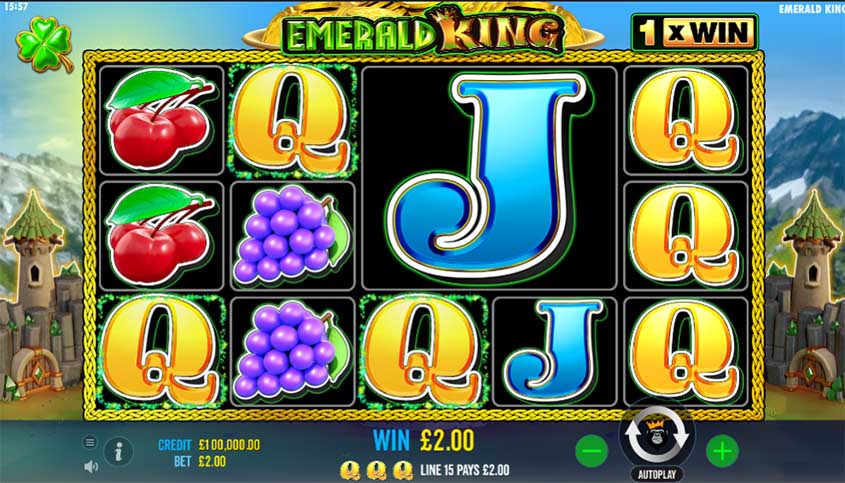