Prowl through the dangerous streets of San Cayetano City in Cash Noire, developed by NetEnt pokies online. Join Detective Flint as you play a pokie with five reels and 1,024 ways to win. Move across the map from 20p per spin and chase down criminals in this fun themed game. Read our full review below.

Net Ent’s Cash Noire, also known as Jack Hammer 2 online pokie, is a uniquely themed pokie game that stands out from the rest. Cash Noire is played across five reels and four reels, adding up to a total of 1,024 different ways to win. Players get a win when there are three or more of the same symbols on reels next to each other across the board. Cash Noire is a low-variance pokie, offering a hit frequency of around 21.87%. For those of us who left their maths skills behind at school, that means over one in five spins will result in a winning combo.

Statistically, most player wins will come in the base game (just over 73%) with the rest coming in with the Free Spins feature (where players can get a ten-times multiplier, with a win-rate of over 22%). Combined together, players can expect a solid RTP rate of 96.06%.

Players can spin in Cash Noire from 20p to $200 per spin. Gameplay can be customised by using the advanced settings and using the autoplay function. Here up to one thousand autospins can be selected, and players can choose to stop playing on any selected winning combination, if your bankroll decreases by a set amount or if you reach a certain winning payout.

Cash Noire has a murder mystery theme that really makes it stand out from other pokies. Set in the noir-inspired city of San Cayetano, the player joins Detective Flint as he attempts to solve the case that could make or break his career. He needs to solve the Green Ace murders and, to do so, must infiltrate the illegal card games that take place in the Cat’s Eye bar. This theme is really fun and incredibly engaging, making Cash Noire very distinct from other pokie games and including a storyline for players to feel really immersed in a smoky noir world.

Players will watch magnifying glasses, lit matches, tumblers of fine amber whiskey, Ace playing cards and daggers and pistols move through the reels, but they’ll really want to watch out for the character symbols. Amidst gangsters and down-trodden detectives, keep an eye out for the smoking dame. She’s the highest-value symbol in the game, bestowing players 0.2, 0.6. Or 0.8 times their stake for three, four or five in combination.

Cash Noire has a Return To Player - RTP - value of 96.06%. The pokie is a low-variance game with a top win of over 1,033. Players should be responsibly patient while playing, but with four bonus features, Cash Noire offers quick and dynamic gameplay.

How to Play Cash Noire

How might a player get started with Cash Noire? Here are a few hints and tips to start a game.

1. Use the options on the left-hand corner to adjust the paytable. Review your payouts and adjust the visual and audio effects to what you find comfortable.
2. You can also find more detailed game rules.
3. The autoplay function lets you set a specific budget and how many spins you want to go through at a time.

Cash Noire has a minimum bet of 20p and a maximum bet of $200. Players can control the size of their bet using the ‘Bet Level’ button. All the wins are displayed in multiples of a bet per line, and the highest possible line win is 1,033 times your bet per line.

One of the best parts for players of the Cash Noire pokie is that it comes with four bonus features. Cash Noire uses the Avalanche feature, first seen in games like Gonzo’s Quest. Every time a player gets a winning combination, an avalanche starts up. The winning symbols vanish from the reels, and new symbols rush to fill the space.

This continues on and on until no new winning combinations are made. Cash Noire also has the Crime Zone. This will create a red pattern of hotspots for every spin. Starting out with just three, it will increase as clues from Detective Flint’s clue list are triggered. Each winning symbol from the Crime Zone gives you something from the Clue List.

Players may find their reels have a mysterious vault symbol from time to time. Landing inside the Crime Zone, this vault will reveal a random symbol - and then copy itself on all spots inside the Zone! This will create much bigger wins and combinations.

Once all thirteen clues have been activated, the player gets a Free Spins round with six free spins. As players follow the City Chase Map to hunt down the Green Ace Killer, each location earns a new multiplier and the chance to win free spins.

There are a lot of gameplay features in Cash Noire - more than with the average pokie. This can make it seem a bit daunting and complicated at first, but nothing could be further from the truth. Once players have got their heads around the bonus structures - and that they need to focus on getting symbols inside the Crime Zone - gaining mystery symbols and free spins can lead to quite large multiplier bonuses of ten times the stake.

The theme and gameplay also adds extra dimension to Cash Noire that is lacking from other pokies of a similar type. The design and graphics are really outstanding and elevate it beyond other games of this type. 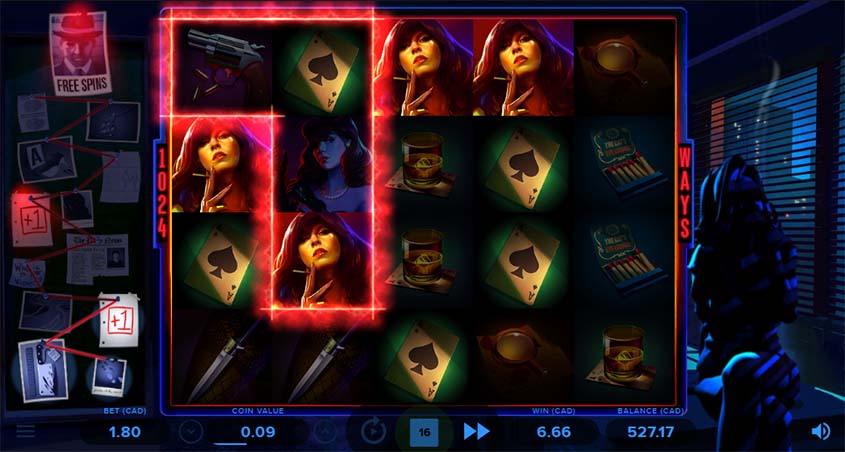