Lock all the doors and windows, turn out the lights and settle down to play The Wolf’s Bane, the latest horror-themed pokie game from NetEnt. Join the motley crew of villagers as they search under the light of the full moon for the man-beast that terrorises their community. Across five reels and 10 paylines, you’ll encounter Werewolf Wilds, Full Moon Scatters and free spins with a choice of wild modifiers. There’s a bonus pick round too, with prizes on offer worth up to 50x your stake. Read our full review below.

What is the RTP and volatility of The Wolf's Bane?

The Wolf’s Bane reports an RTP of 96.74%, which means the game pays out an average of $96.74 for every $100 wagered. But the way that RTP is calculated, over several weeks, using data from hundreds of players, means that not all players can expect to see this level of returns. Hopefully, you’ll walk away with the top cash prize, but you could also fail to win back any of your stake money.

As a medium-volatility game, The Wolf’s Bane should be suitable for most types of pokie fans, whatever their attitude towards risk. But very cautious players, newbies and anyone with a modest gaming budget is advised to stick to playing for free, at least in the first instance. Big wins can take a long time to spin up on the reels, with most of the profitable gaming taking place during the free spins bonus rounds. So the more you play the game risk-free, the greater your chances of having a successful outcome later on, if you decide to play for real cash at an online casino.

How to play The Wolf's Bane

There are 10 fixed paylines across the reels of The Wolf’s Bane, so that removes one decision-making process. All you have to do is decide on the amount of your bet, and since this is a medium-volatility game, hoping to attract both low-risk and high-risk gamers, there’s a wide choice. The minimum stake is just 0.01 per line, so across all 10 lines, that’s 0.10 in total. At the other end of the scale, the maximum wager of 10 per line brings the total spin cost to 100.

There’s an Autoplay function, which is accessed just to the left of the central Spin button. If you’re going to play for a while at the same wager, it’s worth activating this function, as it leaves you free to watch the on-screen action as it unfolds. 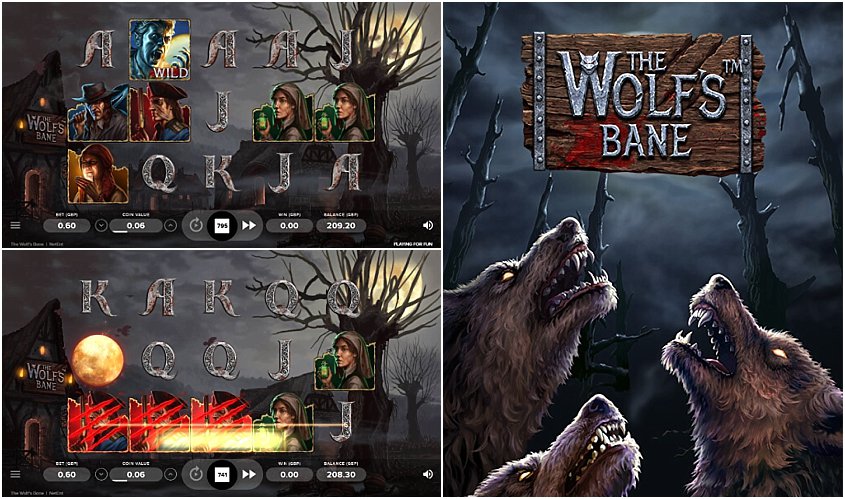 How to win at The Wolf's Bane

The aim of the game when playing The Wolf’s Bane, is to spin up three or more matching symbols across one of the ten paylines. The first example of a winning symbol must always appear on the first reel, to the left-hand side of the playing area. Subsequent matches must occur at least on reels 2 and 3, within a payline’s structure, to qualify as a win. And of course, you win even more for matching up four or five of a kind.

The Werewolf wild, depicting a man about to change into a werewolf, is able to substitute for all other symbols, apart from the bonus and the scatter. So whenever this symbol appears, it has the potential to form winning combinations and reward you with cash prizes.

NetEnt has been around for long enough to know what pokie fans want, and bonus symbols and free spins are always on the wish list. So The Wolf’s Bane offers up a bonus as well as a scatter, to introduce some added-value features.

The bonus symbol is the wolf hunter carrying a crossbow. He only appears on reels 1, 3 and 5, but when he appears on each of those reels simultaneously, you’ll be offered a Pick Bonus. Choose one of the bonus symbols to reveal a bet multiplier worth up to 50x your stake. But be careful, as it turns out the wolf hunter may just have been bitten by a werewolf himself!

The full moon scatter heralds the start of the free spins bonus round, but you’ll need to spin up at least three examples, in any position across the reels. Three scatters gives you 10 free spins, four scatters awards 20 free spins and if you’re lucky enough to spin up five scatters, you’ll get the maximum 30 free spins. The feature can also be retriggered during your free spins by collecting further scatters.

Just before your free spins start, you’ll be shown the four Wild Modifier options available to you. Click or tap to stop the lighting sequence, and discover which modifier you’ve been awarded. Regular wilds act as substitute symbols in the usual way. Expanding wilds stretch up and down to encompass an entire reel. 2x multiplier wilds double any wins in which they feature, and spreading wilds reach out to neighbouring symbols, turning them wild in the process.

Our review of The Wolf's Bane

Players around the world love NetEnt pokies, and with good reason. The company has become one of the best-known, and best-loved, software developers in the online casino industry. Attention to detail is key to their success, with superior graphics and soundtracks that complement the games on offer. And The Wolf’s Bane certainly lives up to the company’s reputation. Every aspect of the game has been painstakingly crafted to ensure that the finished product creates exactly the right mixture of creepy tension, combined with the excitement of winning cash prizes. This is a game that we highly recommend, especially if you’re a horror fan. For those of a more nervous disposition, we suggest the altogether more saccharine Full Moon Romance online pokie - although be careful, as even this gentle romantic story has a hidden bite!

Can I play The Wolf's Bane for free?

All of the games across our entire site, including The Wolf’s Bane, are free to play for as long as you like.

Does The Wolf's Bane pokie have free spins?

Spin up three or more Full Moon scatter symbols on the reels of The Wolf’s Bane, to be rewarded with up to 30 free spins

Is The Wolf's Bane free pokie available on mobile platforms?

You can play The Wolf’s Bane pokie on all connected devices, including mobile and tablet.

All NetEnt pokie games are governed by random number mechanics to ensure a completely fair and random outcome from every spin.