In 2017, NetEnt introduced a new title featuring Finn the leprechaun - a cheerful flute-playing character who was the star of Finn and the Swirly Spin. The game and its style became so popular that NetEnt decided to develop a second instalment - Finn's Golden Tavern. This new 5x5 reel pokies game builds on the same concept of its predecessor and features the same spiral design, avalanche mechanic and cluster pays system that proved to be popular. This medium volatility pokies game has a 96.1% RTP and you can bet from 0.10 to 500.00 per spin. Read our full review below.

This sequel isn’t nearly as colourful as the original Finn and the Swirly Spin, but that’s because the setting has changed; Finn has decided to take a break from his busy little leprechaun life and pay a visit to ‘ye olde tavern’. The reels are set on the close up of a wooden table, surrounded by a compass, dice, a candle, beer mats and Finn’s flute. The reels themselves have an array of different drinks containers, four different gold coins, a treasure chest and a rather mean looking wild star with an eye patch. It seems that after a hard day of flute playing, Finn likes nothing better than a nice cold drink and winning big at the pokies!

The rules and game play mechanics in Finn's Golden Tavern work in the exact same way as the original and utilises the famous swirly mechanic. There are 5 reels and 5 rows, a wild symbol, a Free Spins Chest, free spins with a multiplier bonus and two different random features. Finn’s Golden Tavern brings back all of the most popular features and gives them a fresh new twist. 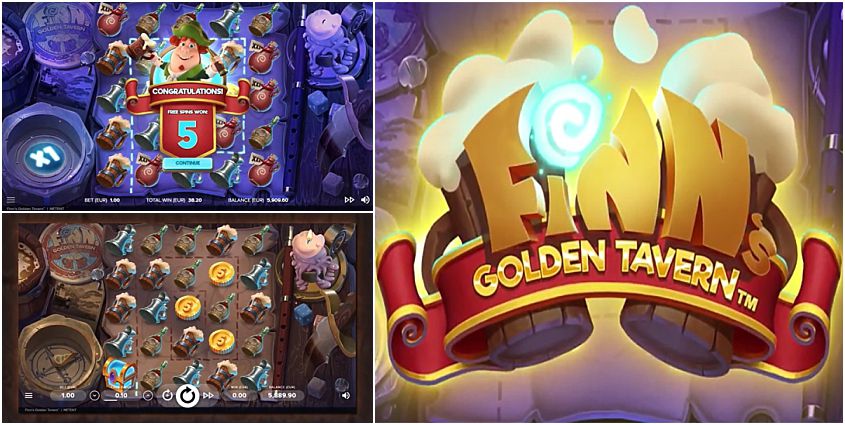 Finn's Golden Tavern online pokies is a medium volatility game, which means there’s the potential for some really big payouts, but also some long gaps and dry spells to wait out while you’re between winning spins. The RTP (Return to Player) is a rather nice 96.1% which is around the industry average.

The easy to understand controls let you adjust your betting stakes from anywhere between 0.10 to a maximum bet of 500.00.

How To Play And Win At Finn's Golden Tavern Pokies

First, use the Level selector in the bottom left corner to adjust your wager level. The game has 1-10 bet levels at 10 coins per level, each level has different coin values. Then you can use the Coin Value adjuster until you reach your desired betting levels. Once you’ve finished, click on the play button located in the centre of the bottom status bar to spin the reels. You can also select the autoplay button and choose a set number of spins to take.

A win match occurs when 3 or more of the same symbol appears on any horizontal or vertical line, and a single row or column can contain more than one win. Each of the coin symbols has a different value assigned to it and when you match 3 or more the payout is the sum of all coin values in the match. When you get a winning match combination, you will see animations on the screen to let you know. The winning combinations can be found on the paytable in the bottom left game menu. Winning a round with coin wins is equal to the value shown in the paytable multiplied by the bet level you have played the winning spin with. The resulting amount can also have special multipliers added to it when applicable. A win in currency equals the win in coins multiplied by the coin value. During each game spin, only the highest win per match is paid.

This game also features wild symbols, which can substitute the coin symbols but won’t show up during the initial spin. Combination wins with wild symbols can intersect or overlap in the rows or columns. Winning combinations of just wild symbols will be counted, but only if there are no other wins. When this happens, the wild symbol will function like random coins and will be assigned the same random coin value. When 3 or 4 wilds are adjacent in a horizontal or vertical line they cannot create a win by themselves - instead, they may only substitute for the symbols on either side of the line.

Avalanches occur after the spin, so after all wins have been evaluated the symbols in that combination will explode and disappear; causing the symbols to rearrange once again. Once the symbols come to rest, an evaluation of new wins is done based on how the reel grid appears.

In this game, you will always start with a Free Spins Chest symbol in the bottom left place on the reels, as you play your spins and rearrange the symbols the chest will progress towards the centre of the spiral. Once the chest reaches the central position it will trigger five free spins in the game. This free game is played the same as the base game, but comes with a range of bonus multipliers that can increase your win payout. During this time you will see a multiplier meter, which fills up one step for each wild that is generated during avalanches. The multiplier level increases by 1 for every 5 steps filled in the multiplier meter.

Finn's Golden Tavern Pokies is available on any device with a browser, which means it looks great on PCs, iOS, Android mobile and tablet. It’s an HTML5 game, so you can access it from any device with an up to date internet browser. It isn’t too heavy on animation and the sound is basic, so it’s really fast loading on most devices. You can find this game and other similar titles at free NetEnt pokies.

Finn's Golden Tavern isn’t quite as thrilling and colourful as its predecessor and though its spiral gameplay is unique, the intricacy could be confusing and off putting to the novice pokies player. It's nice to play and cheerfully relaxing, but lacks a certain level of engagement. Whether you like concept or you don't, you should still check out this interesting spin on pokies games.