If you love fantasy-themed pokies, NetEnt’s Wilderland will be right up your alley. This superb five-reel, three-row, 20-fixed payline pokie is packed full of fun and free spins. Walking wilds and other special wild symbols make it a real treat, as does the Activation Zone in the middle of the reels. The RTP of 96.16 per cent is also impressive, as is the top jackpot payout of a whopping 240x your stake. Read our full review below.

Wilderland has an engaging theme with the action taking place in a mystical forest at night. The game opens with the elven huntress in the forest and turns to the backdrop that players will see while they spin the reels. A tree in a female form with glowing eyes watches over the transparent reels, with the symbols on the reels all tying in perfectly with the theme. The elven huntress, a wolf, a bow and quiver, a purple ring and a blue pendant make up the higher value icons, while the lower value icons are playing card symbols designed to look like leaves.

How to play Wilderland pokies

As Wilderland has 20 fixed paylines, you don’t have to choose how many you want to activate per spin. All 20 are in play at all times, so you have the maximum chance of landing a win. If you want to win the largest possible payouts, you can bet the max. To place your bets, simply click the plus and minus arrows at the base of the screen. You can bet from as little as 0.01 up to 20.00 coins per spin. Once you are happy with your stake level, hit the round arrow spin button and the real fun begins. 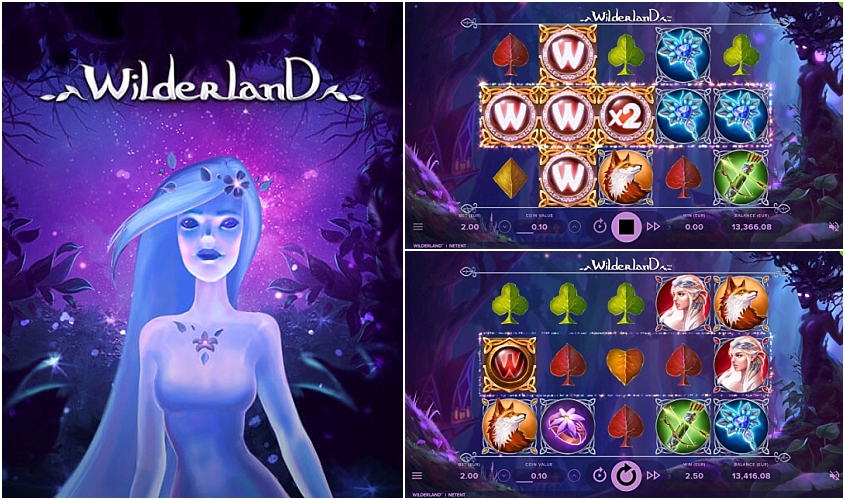 How to win at Wilderland pokies

If you are looking for a win in Wilderland, all you need to do is land three matching icons on a payline from left to right or two matching icons and a wild. The pokie’s paytable outlines each symbol’s value and what you will win when different combinations occur and can be accessed by hitting the settings button on the left of the screen.

When it comes to bonus features, Wilderland is filled with added extras that could give your winnings a boost. The standard wilds can stand in for all other base symbols to complete a winning combination, with the Forest Treasure feature kicking in if you land at least two of them in the Activation Zone. In this feature, the wilds can transform into walking wilds that move one position to the left with every spin until they fall off the edge of the reels; alternatively, they can become walking wilds 2x with a 2x multiplier. They may also become expanding walking wilds that cover an entire reel and move one spot to the left with every spin, or they may transform into scatter walking wilds that move one spot to the left with each spin and can stand in for scatter symbols to trigger the free spins bonus round. Last but not least, if a full stack of walking wilds falls off the reels, a magic wild may come into play and all the wilds will appear back on reel five and the whole walking process can begin again!

This pokie has a max jackpot of 240x your stake. You will win this if you fill the screen with the elven princess and the 2x multiplier is in play.

Wilderland has been designed for play on desktop, mobile and tablet and runs smoothly on all platforms. You can enjoy the crisp graphics and ethereal theme on your smartphone and take the fun with you wherever you go. Provided you have an internet connection, this pokie is always available for your enjoyment.