Super Striker is an online pokie developed by Net Entertainment (NetEnt) with features including free spins, a golden multiplier and a bet slip. It has five paylines, an average expected RTP of 96.4 per cent, high volatility and a football theme. Read our full review below.

Do you love football? If so, kick off your own football season with this online video pokie. The chances are that you will love the thrilling game of Super Striker, which is set in a floodlit football stadium with commentators adding to the excitement. It is packed with typical Net Ent in-game features, such as free spins, football scatters and a golden scatter, resulting in lots of excitement on the game’s reels. The gameplay is swift and with a good choice of betting options, players will undoubtedly enjoy the big game. The symbols include football-related icons, including boots, golden boots, players, and regular, double and triple goal symbols.

The free spins feature is triggered when a certain number of scatters appear on the reels.

The RTP - or return to player - is a respectable 96.4 per cent. In layman’s terms, this means that a player can expect an average return of 96.4 for every 100 wagered, which is not bad! The volatility is high.

Super Striker’s top prize is a back-of-the-net 5,000x the original stake, meaning, a lucky player can bag 375,000 if they stake the maximum wager of 75! Betting starts at 0.10, with prizes awarded from the first and third reels.

- The low-paying out symbols are the single, double and triple goal symbols. These pay out for three of a kind or three in combination.

- The mid-paying symbols are a pair of normal football boots, a golden boot, and a player who looks as though he is having some issues with the game!

- The highest-paying symbol is the golden player, who is worth a nicely rounded 100x the original stake. This is 10 times more than the second icon on the game’s paytable.

You guessed it - the theme of Super Striker is football! The sound effects match the theme and the visuals will appeal to all gamers and lovers of the great game itself. Although the game has a simple layout - some say old fashioned, we say retro - the graphics are modern and well-designed. The soundtrack includes chanting football players, adding to the authenticity of the game.

How to play Super Striker

Here are some top tips on how to play Super Striker:

1. To kick start the game pun intended! - simply hit the spin button to set the reels in motion.

2. If you want to win cash prizes, focus on the free spins and bet slip features.

3. You can utilise the autoplay function if you want to watch the reels spinning with no effort on your part.

4. There is no wild icon, which means winning combinations can’t be created with substitutions.

5. Look out for the bet slip function, which allows gamers to bet on the number of times particular symbols appear on the reels. Choose the symbol, the number of spins - these range from 10 and 100 - and place your bet. This can lead to a cash prize of 978,000! Be aware that this almost feels like a separate setup to the base game, so keep your wits about you!

6. Golden scatters can return a prize of 20x the original stake.

7. The bonus round is activated when three football scatters or two plus a golden scatter appear on the reels. Once in motion, golden scatters and blanks are the only symbols that will appear, with players charged with filling the reels with these to move on to the next level and increase multipliers.

Super Striker is an entertaining game incorporating modern graphics with a classic layout. We liked this uncomplicated approach, as it doesn’t distract from the game and simply allows a player to get going without any hindrances. It has a World Cup atmosphere about it and will appeal to players who like a bit of FIFA action. We liked the nod at realism with the player viewing the game’s setup as if sitting in the stadium.

For those who prefer a bit more pizazz, the simplicity of Super Striker may well not work. It is your call and we won’t be handing out any red cars due to your decision; however, our view is that it offers some solid gaming, a nice bonus feature and the chance to win some sizeable prizes.

Super Striker is one of many NetEnt pokies that you can enjoy for free right here at Online Pokies 4U. You might also like to try the Football Frenzy pokie. 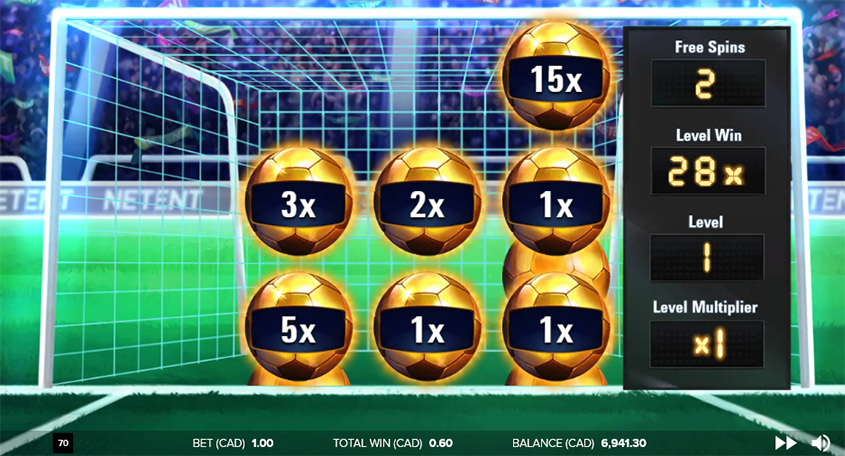 When was Super Striker released? Super Striker was released in May 2020.
How many paylines does the game have? There are five fixed paylines.
What is the betting range? Bets range from as little as 0.10 up to 75.00.
What are the game’s main features? The game’s main features include free spins, multipliers, a bonus game and scatters.
How many reels and rows does the game have? Super Strike has three reels and three rows.
On which devices can Super Striker be played? The game’s software is fully compatible with the most commonly-used devices, such as laptops, tablets and smartphones.
What’s the minimum coin size? The minimum coin size is 0.02.
What is the maximum coin size? The maximum coin size is 15.
What is the history of NetEnt? Net Entertainment - affectionately known as NetEnt in the industry - is a digital entertainment company that provides state-of-the-art gaming solutions to some of the very best worldwide online casinos. It began life back in 1996 and has established itself as a real champion of thrill-seeker-style games utilising the very best of modern technology.