Gods of Gold Infinireels has five reels and betting starts at $.05 per spin, going up to $125. The RTPI is 94.87%. It is a medium- to high-variance pokie. It has two random features that allow a re-spin. You also get extra reels with guaranteed wins on the random features. Read our full review below.

Gods of Gold Infinireels is a great game powered by NetEnt online pokies.

Gods of Gold Infinireels, powered by NetEnt, has a Babylonian theme. The game is based on an undead Pharaoh who has been trapped in an ancient chamber for who knows how long. Spooky!

It’s an engaging game with some great bonus features. The game is a fast-paced pokie, and if you are new to these games, play the demo first until you know what you are doing. There are lots of features here, and you need to pay attention. However, the makers have put in some features to help you out.

In keeping with NetEnt’s other games, the graphics and artwork are very visually appealing. The game is set against scenes of mountains containing treasure with a gold theme. Even the gems are beautiful to look at, and they neatly break up the golden background. It’s all very opulent. The special character symbols look unforgiving and unfriendly, until you get a win from them.

How to Play Gods of Gold Infinireels

You may think this is like other games, but not so. This pokie game has 3x3 reels, which give it 27 ways to win. Every time you hit a winning combo, a new reel is added to the right. This is what the makers call the . A new reel is formed until the wins stop coming. That makes it pretty special and exciting. You have no idea when the winning will stop.

Of course, you have to stop winning at some point - that’s just the nature of the beast. But if you land on the Wheel of Fortune round…. Well, some of the biggest wins are here, so keep hoping you will hit this when you play.

Every time you get a new reel, the number of ways to win increases like this:

If all this sounds a bit confusing, the makers have, very helpfully, included a mini map to help you keep track. They have also provided a that shows the length of the win.

Then there are the special bonus features. At the end of your spin, you may be lucky enough to have a

At the end of a series of wins, it is possible for the reels to spin again, randomly, one more time. This will give you the change to win and continue the infinite reels feature again - hence the name of the game.

Another feature of this game is the Win Spins. There is a prize for each of them. This is where you get three or more sun scatter symbols, which trigger ten free spins.

What Has to Match Up?

There are eight symbols in this game. You’ve got the lowest-scoring blue gems and then green, followed by purple and red. If you match three or any one colour, your win is x1, but matching four for the blue gives you x2 and matching five gives you x3. The others are somewhere in between until you hit red, which will give you x3 for four and x6 for five.

The special symbols in this game are the Eagle, the Bull, the Queen and the highest-scoring Pharaoh, which gives you x25 for three and x100 for five. The Queen of Gold pokie gives you x10, x20, or x40, which is pretty good too. The Bull gives you x5, x15 or x 30, and the Eagle x5, x10 or x20, depending on the number of reels. All in all, it seems pretty fair. There is a which is your wild symbol. If you are lucky enough to get two of them next to each other, or at the end of a combination, then happy days: you get a bigger win.

The Lightning Symbol is another wild, but the Temple doesn’t substitute for that. It only falls on the third reel, but when it does it introduces more wild symbols, making it easier for you to win by making combinations that pay out.

Another bonus feature is the wheel of fortune, which if it lands three times on the inside reels two, three and four triggers the bonus feature. 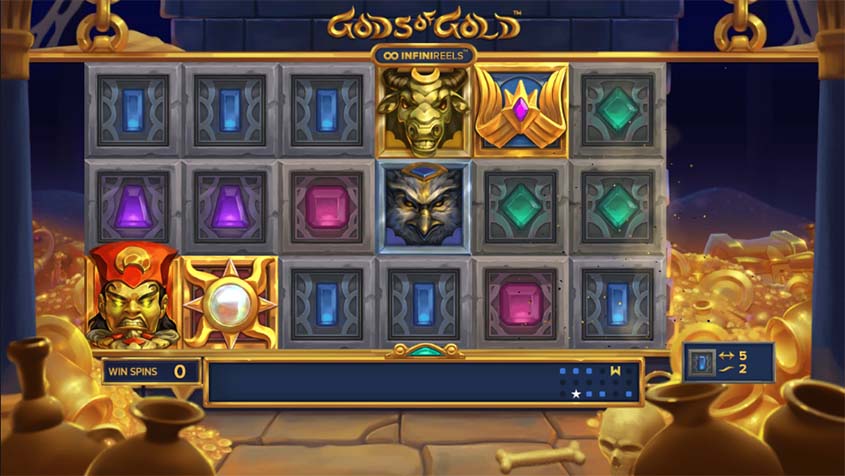 What is the RTP? The RTP is 96.21%. Most of your wins will probably be small, but there is the chance of some big wins here.
How volatile is the game? It’s a medium- to high-volatility game.
What is the biggest win available? The biggest win is x25000 your stake.
What are the stakes? You can start at $0.05 and go up to $125.
Can Gods of Gold Infinireels be played on mobiles? Yes, it can be played on desktops, tablets and mobiles. Anything, as long as it uses iOS, Android or a Windows operating system.
Does Gods of Gold Infinireels have a free spins bonus round? Yes, it does. If you land three pearls on the reels, you will trigger the
Isn’t this just the same as other three-reel pokies? No, not at all. The extra reels you can get make it nothing like any other game you’ve ever played.