Lucky Neko Gigablox is an online pokie developed by Yggdrasil. It features six reels and 40 paylines, rising to 85 during free spins. The RTP is 96.4% and the maximum win is 6,953x your stake. Other features are a multiplier, free spins, high volatility and stacked symbols. Read our full review below.

Lucky Neko Gigablox is a pokie which concentrates on the Gigablox feature, whose mechanics allow symbols to appear at sizes up to 4x4 when the base game is operating and 6x6 when free spins are activated. During free spins you will enjoy an expanded 8 rows.

At this point in the game, one of the symbols becomes the Blessed Symbol and that tile’s payout is subject to a 5x multiplier. When this happens, the symbol is engulfed by flames. Wilds and free spins are never the chosen symbol.

The Gigablox Feature is key to this pokie and its enjoyment. All symbols including free spins and wilds can appear as Gigablox. In the base game, they can range from 2x2 to 4x4 and during free spins from 2x2 to 6x6, creating multiple wins across reels. This a great bag of extras making the bonus section of the game more exciting.

The free spins feature comes into play when the player lands five or more Lucky Cat symbols. You receive one free spin for each cat symbol, so a minimum of five. When the symbols appear as a Gigablox, you can be awarded a maximum of 16 free spins. If you manage to land a cat symbol during free spins, this will automatically add another free play.

A win occurs when the player matches three symbols across any of the 40 paylines in the base game, left to right from reel one. Bets begin at 0.08 with a maximum of 100. If you engage the Autoplay feature, you can opt for an infinite number or set a limit up to 1,000. You may want to customise this option during free spins by adjusting the speed of the spins or disabling autoplay at either a single win or at any amount that your balance diminishes or increases.

Remember that any symbol chosen as the Blessed Symbol receives a further 5x multiplier when it appears on a winning line.

Lucky Neko Gigablox bases its visuals on the Daruma Dolls which feature heavily in Japanese culture, being seen as lucky and blessed with further symbolism. As in real life, the dolls appear in different colours, alongside the easily recognisable card suits which represent lower rewards.

The name of the game comes from the cat figurines, Maneki-Neko. Their images appear in many Eastern-themed pokies.

When the screen opens, it appears to be night-time and the backdrop features statues, kitchenware on shelves and in the foreground, vases placed on the floor on a mat. A large Maneki-Neko sits in the bottom right-hand corner. The soundtrack is gentle, featuring traditional Japanese instruments and a soothing voice.

Lucky Neko Gigablox is a great addition to the Yggdrasil pokies stable and a tribute to these skillful designers. The game lures you in, as does the soothing soundtrack, a real change from the standard pokie.

The high volatility setting means big wins are a little less frequent, but when you do land one, it certainly adds to the excitement, as the winning potential is generous. For once, the free spins round is not crucial to the game, as it does not pay much more than the base game - the bonus is that you do not need to obsess about triggering it. Maybe this will change in future editions.

The Gigablox mechanic is also pretty cool, and not seen that often across other pokies. It certainly adds to the excitement of the game. If you manage to get a high value tile blessed, you are on for a big payout, with the added 5x multiplier, not forgetting the maximum 6,953x stake multiple.

The game also enjoys HTML5 technology and plays equally well across all devices including mobiles and tablets using iOS, Android or Windows.

If you enjoy a Japanese-themed pokie with big win potential, this is the game for you. 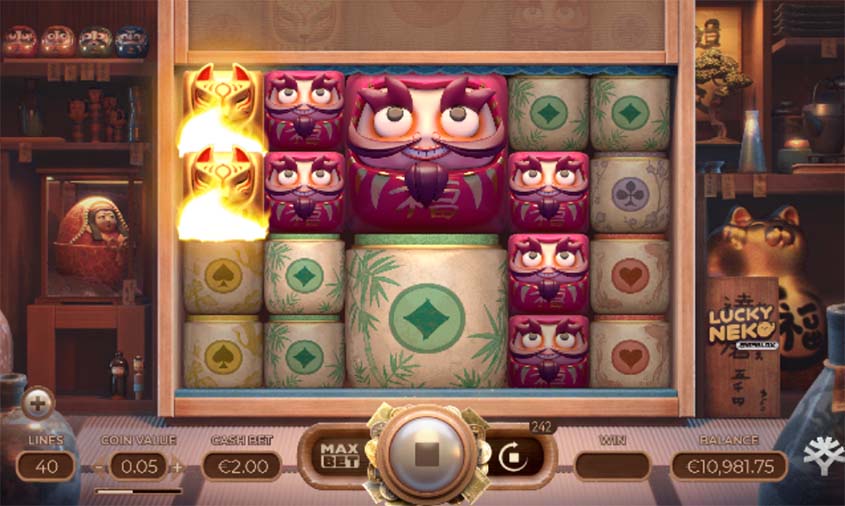 What is the RTP of a Lucky Neko Gigablox pokie? The RTP is 96.4% and slightly above average. The game volatility is such that you should expect a winning combination every six spins or so, with a reasonable chance of a big win.
What is the maximum pay-out on Lucky Neko Gigablox? The maximum payout is a healthy 6,953x the total stake. This is a result of the number of paylines peaking at 85 during the free spins mode of the game and the Blessed Symbol introducing a 5x bonus payment.
Are there free spins on Lucky Neko Gigablox? Free Spins are triggered by a Lucky Cat symbol and, depending on how many land, this can result in 5 to 16 free spins. Whilst this feature is active, if you land another Lucky Cat, each one will add another spin with no limit, leaving you feline fine!
How do Gigablox work in Lucky Neko Gigablox? This is a key feature of this pokie. All Gigablox games have tiles which can fill spaces across reels and rows of 2x2, 3x3, and 4x4, and during free spins they can grow to 5x5 and 6x6 images, leading to combinations of increasingly high values.