Lightning Joker is an online pokie created by Yggdrasil. With three reels and five paylines, this high volatility pokie has an RTP of 96.3 per cent, three bonus features, and a maximum payout of 10,000x your bet. Read our full review below.

Jokers seem to be a common theme amongst Yggdrasil online pokies, but rest assured that each game is distinct and individual when it comes to the features, gameplay and bonuses. The biggest difference between Lightning Joker and its siblings is its retro look and feel, with its three reels and traditional symbols such as fruit, 7s and bells. This pokie boasts three bonus features, including a mystery win dictated by the Lightning Joker scatter, a multiplier strikethat can win up to 10x for five of a kind, and a rapid respin that freezes symbols and spins the remainder for the chance of a bigger win.

How to play Lightning Joker

1. Once Lightning Joker has finished loading, you will be presented with a splash screen featuring the different bonuses on offer. Click or touch anywhere to start and you will be taken to the reels and their controls. To the left is your toolbar, which you can expand or minimise; from there, you can access the game's rules, paytables and settings.

2. Access the settings in the toolbar to customise your experience; for example, you can control various aspects of audio, spin speeds, keyboard controls and autoplay limits.

3. Adjust your bet with the buttons to the left of your spin button, increasing or decreasing the bet amount with the + and - buttons, or select max bet. You can also choose to display your bet in coins or as cash.

4. If you want to use the autoplay feature, it is the circular icon to the right of the spin button. You can select the number of spins you want to play, with the options including large numbers and an infinity selection. Be sure to adjust your autoplay loss limits in the game's settings before you start using autoplay.

The symbols often appear in stacks in this pokie, as two of the three bonus features are all about matching as many of the same symbol across all nine positions on the reels as possible.

The most frequent of the bonus features is the Rapid Respin. This feature is triggered when any two reels match stacks of the same symbol (including wild substitutions). These symbols are then frozen while the remainder are spun again for a chance for additional matches. The result is the chance of bigger wins across more paylines, including activating the Multiplier Strike.

If the same symbol appears in all nine positions on the reel (including wild substitutions), the Multiplier Strike comes into play. All but the central position turn into potential multipliers: 2x, 3x, 5x or 10x. The symbol in the middle zaps the multipliers at random until just one multiplier is left, which determines how your eventual win for the bonus round is calculated; for example, if the 7 symbol triggered the multiplier strike, it would first win on all five paylines at its given pay rate of 20x your bet, giving a total of 100x. The multiplier strike bonus would then increase this amount by 2x, 3x, 5x or 10x, giving a maximum potential win of 1,000x your bet for the 7 symbol.

At first glance, Lightning Joker looks like a typical retro pokie. Its darkened, striped background keeps your eyes focused on the reels as they spin, but it is the animations that mix the traditional with the modern and make this pokie look great. Electricity is the theme here, with winning symbols crackling with electrical sparks. They then arc across the winning paylines, zap surrounding numbers in the Multiplier Strike feature, or surround the frozen symbols while the remainder spin in the case of the Rapid Respin feature.

The animations that follow the scatter's Mystery Win are spectacular, and the animated transfer of winnings into the balance is a nice touch. The electro-pop soundtrack during the gameplay is not unlike that of Push Gaming's Joker Troupe pokie, but Joker Troupe has a longer continuous loop. Lightning Joker lapses into ambient background music when the game is idle. All in all, it is a pleasant experience.

Symbols will pay out if three of a kind land on any of the five winning paylines. Wilds substitute any of the paying symbols but also have their own payout if three come in. Pay levels are the following multiples of your bet:

Winning lines run from left to right along each of the three horizontal lines and the two diagonals. 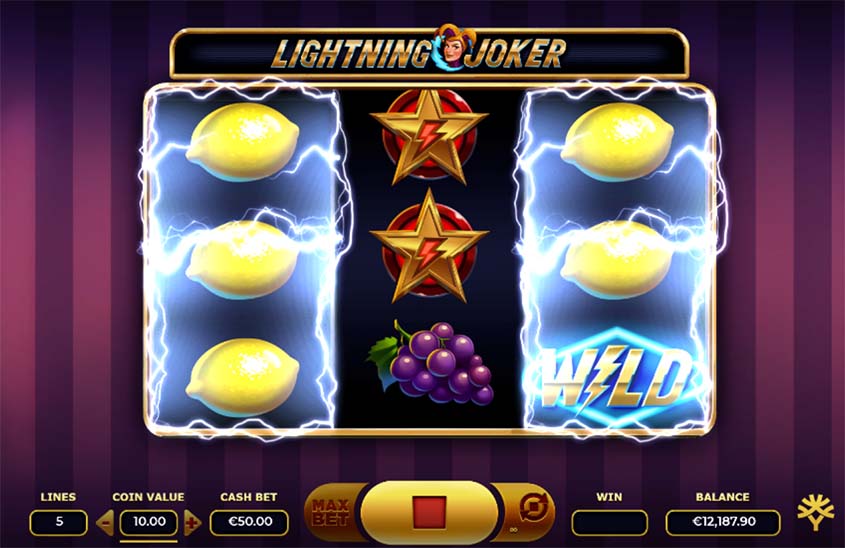