Are you tired of grey skies and rainy days? If you’re done with the clouds and you’re dreaming of sunny skies and hot temperatures, you should definitely check out Spina Colada. The 5-reel, 25-payline game is one of the latest games from Yggdrasil Gaming, and players can expect to encounter extra multipliers, re-spins, free spins and triggered bonus features. The game might not be an actual holiday, but the beach vibes will transport you to a happier place, especially when you see the four bonus features that will help you to cash out with a huge win. Read our full review below. 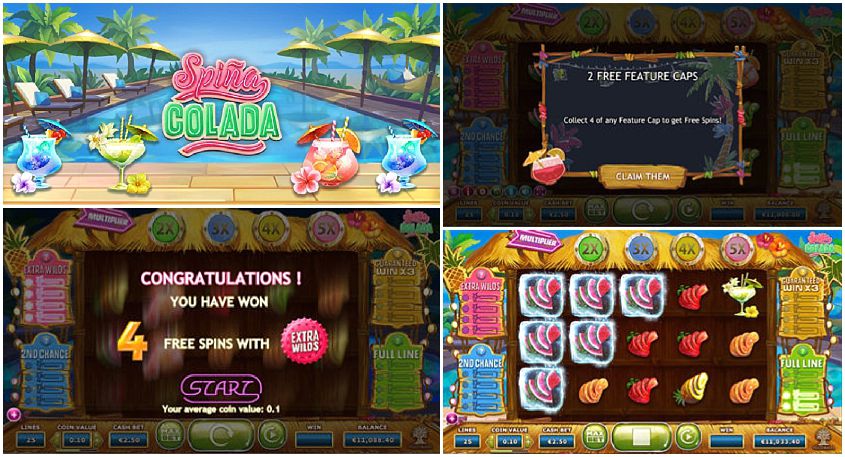 You probably won’t be surprised to hear that Yggdrasil's Spina Colada has a cocktail theme. The game takes place at a tropical beach bar with a hippy vibe, and in the background, you can see the blue sky and a swimming pool that is surrounded with palm trees and sun loungers. The whole scene is very relaxing, but the symbols are bound to keep players on the edge of their seats.

The symbols are mostly made up of fruits and cocktails, including watermelons, oranges, strawberries, pineapples and kiwis. The wild symbol for the game is represented by the Spina Colada logo, and this symbol can be used to replace any of the other symbols on the reels. The game has an easy style that players will quickly get the hang of, although you may be tempted to book a holiday when you stop playing!

Extra Features To Look Out For

The best thing about Spina Colada is definitely the generous amount of bonus features. While most pokies games feature two or three bonus features, Spina Colada goes all out and treats players to an impressive four bonus features. The first is a re-spin feature that many players will already be familiar with. This feature is triggered when players get a winning combination with at least three matching symbols on one payline.

The good thing about this feature is that it will continue to spin as long as there is still at least one winning symbol, so players could potentially trigger multiple wins in a very short amount of time. There is also a guaranteed win feature that will continue to spin until you win, which is fantastic as the player will definitely walk away with a win!

If you land this bonus feature four times, it will trigger an extra free spins round, and if you win during this time, all of your winnings will be tripled. This can result in some seriously high payouts. Finally, there is an extra wild feature that is triggered if an extra wild is on both the second reel and the third reel.

Players should definitely check out Spina Colada because of its generous bonus features and fantastic graphics, especially if they like happy, feel-good games that take place in the sun! Spina Colada can be played on tablet, mobile and desktop devices for fun on the go, just like our other pokies games.