Syncronite Splitz is an online pokie developed by Yggdrasil Gaming. It’s a high variance pokie played on a 6x3 reel grid with a 96% RTP and up to 21,168 paylines. The game includes Synchronized Reels and Splitz Symbols plus the ability to increase the active paylines as you play. Read our full review below.

Syncronite Splitz is the third installment in the innovative Splitz series of pokies by Yggdrasil Gaming. The game features a retro design with classic pokie symbols and a funky soundtrack with a modern makeover that should appeal to a wide range of pokies fans.

The game is played on a 6x3 reel grid, with 729 active paylines to start with, increasing to a maximum of 21,168 as the game progresses. To win in Syncronite Splitz, all you need to do is line up 3+ matching symbols along a payline, starting on the leftmost reel.

There are no Wild symbols or free spins bonus rounds in this game, but there is still plenty of winning potential thanks to the innovative and unique special features Yggdrasil has incorporated: the Synchronized Reels and Splitz Symbols, which we’ll look at in more detail later in this Syncronite Splitz review.

Syncronite Splitz has a very 1920's feel to it, with the reels set on a luxurious silk backdrop and filled with traditional pokies symbols including poker chips, dice, cherries, bells, and more. The jazzy soundtrack provides an uplifting feel to the game and gets you in the party mood as you spin the reels and enjoy the glitz and glamour this era is famous for.

Syncronite Spiltz is a high variance pokie with an RTP of 96%.

How to Play Syncronite Splitz

Whether you’re brand new to the world of pokies or are just looking for a great place to enjoy some free spins before committing your own money to real gaming, here at Online Pokies 4U we have all the best games for you to play completely free of charge!

Before you get started, check out our guide below for how to play Syncronite Splitz so you can familiarise yourself with the rules, controls, and paytable. All the controls for this game are found beneath the reels.

You place your wager in Syncronite Splitz by adjusting the Coin Value. This can be set from 0.005 up to a maximum of 1.00. In ‘Cash Bet’ terms, this offers a betting range of 0.10 up to 20.00 per spin. This small betting range makes Syncronite Splitz a great option for penny players looking to play a higher volatility pokie, but may not appeal to high rollers as much.

The top prizes in Syncronite Splitz are available when you land 6 matching symbols along an active payline. There are no Multipliers or other bonus symbols to be concerned with in this game, so the top prizes for each symbol are as follows:

Syncronite Splitz has two bonus features to help increase your winning potential and add plenty of excitement to the game. These are the synced reels and Splitz Symbols.

On every spin in Syncronite Splitz, a minimum of 2 adjacent reels will synchronise and produce identical symbols. You can spin to reveal up to 6 synced reels and they can form on any reel!

Splitz symbols occur randomly and can appear on any reel (even synced reels). When this feature triggers, the Splitz symbols split up into 8 identical symbols! This feature also increases the number of paylines active in the game, from 729 up to 21,168!

Overall, we thought Syncronite Splitz was a really enjoyable online pokies that utilised the very best in gaming technology to create a high-quality gaming experience. The graphics are beautifully done and instantly transport the player to a world of luxury while the soundtrack keeps things upbeat and cheerful (a must with a high volatility pokie that may take you through long periods without prizes!).

We were a little disappointed by the narrow betting range available in this pokie. Although we agree that it’s generally best to bet lower on a high variance game, it would have been good to have the option to increase our wagers beyond 20 to seek some more impressive prizes.

We did also find we missed having a free spins bonus round. Weirdly, we expected it to be the Wild symbols that we were missing, however the bonus features in Syncronite Splitz meant we landed plenty of wins without a Wild. A free spins feature would have been nice to break up the game. 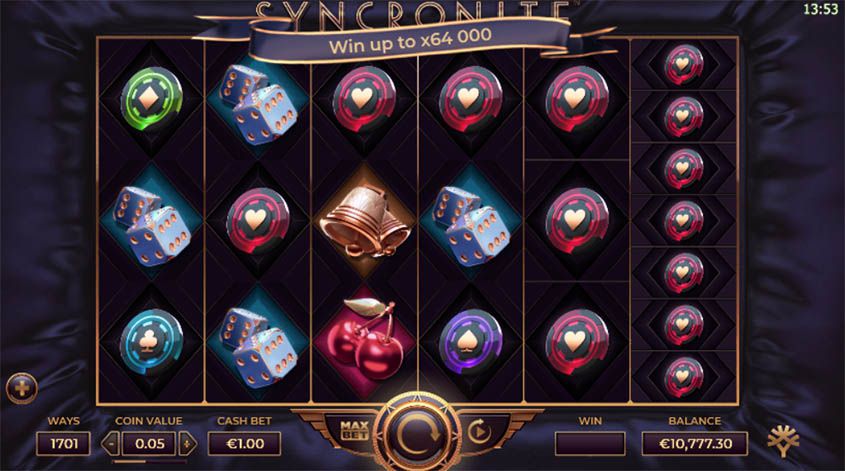