If you like fun, lighthearted games that don’t take themselves too seriously, you should check out Lucha Maniacs. Lucha Maniacs is a 20-payline, five-reel game from Yggdrasil Gaming, and it has a wonderful Mexican theme that is sure to put a smile on your face! The game can be played for a mere 20 cents per spin, so it is very affordable. There are lots of bonus features to tempt you, including a Free Spin feature that can pay out up to 30 free spins! There are also random wilds, sticky wilds, wild wrestlers, multipliers and stacked wrestlers. Finally, there is the Golden Bet feature, which can pay out some seriously impressive wins. Read our full review below.

The theme for this Yggdrasil game is colourful and fun. As soon as you load up the reels, you will see a slightly shaky-looking wooden structure with speakers attached to the top. In the background, you can see a large crowd gathering within a purple haze. This creates an exciting vibe that is perfect for the game!

The symbols on the reels include four scary wrestlers who look like they are ready to fight, and each symbol comes with a different value. One wrestler you will want to look out for is the official Lucha Maniac wrestler, as he represents the wild symbol for the game.

There are also some lower-paying symbols in the form of playing cards, including spades, hearts, clubs and diamonds. The game comes with five reels and three rows, along with 20 fixed paylines. You can spin the reels from .20 to $100, so there is a lot of variation. You can play if you are on a budget, but you can also play if you are a high roller!

Fun Features To Look Out For

The company behind this game definitely wanted to impress players with lots of different bonus features! There are plenty of different features to check out, from free spins to wilds, but one of the best features has to be the Golden Bet feature. This feature can provide you with one extra bonus when you start the Free Spin feature, so you already have 30 free spins.

You can make the game even better by adding mini features such as sticky wilds, wilds and multipliers. There is also a Poster Game feature that offers cash prizes and more free spins, so this game comes with lots of generous bonus features! If you want to trigger the free spins feature, you will need to get at least three bonus scatter symbols on the reels. If you manage to get three symbols, you will win seven free spins.

This is because they increase your chance of walking away with multiple wins, but it is important to note that you will need to trigger the free spins round if you want to enjoy any of these mini features. Finally, the game comes with a Poster Bonus feature that can be triggered if there are two bonus symbols on the reels during the base game. This feature will give you access to the Free Spin feature, so keep your eyes peeled for bonus symbols on the reels! 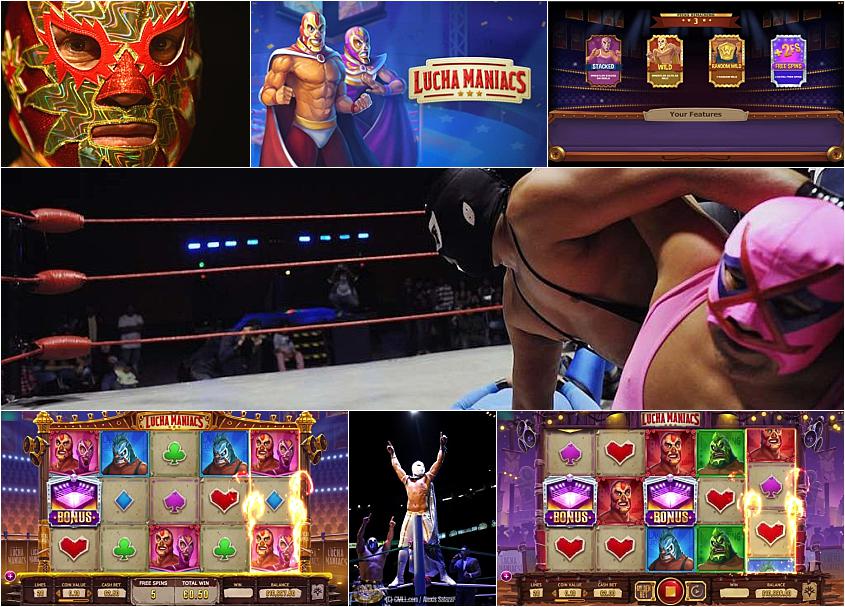 Lucha Maniacs on Mobile and Tablet

If you don’t want to game on your laptop or your computer, that isn’t a problem. Lucha Maniacs can be played on desktop, mobile and tablet devices, so if you prefer, you can spin the reels on your phone. You don’t need to worry about the quality being reduced as the games uses the revamped iSENSE 2.0+ platform. This means that the game comes in high definition, so it looks just as good as it does on a computer.

The game developers behind Lucha Maniacs are known for creating visually stunning games with fantastic plots and solid soundtracks, and this game is no different. The visuals for this game are great, even if they are lighthearted, and the soundtrack fits in with the theme perfectly. However, the real highlight of the game has to be all of the bonus features.

There are so many different features to check out, and the mini features in particular are very enjoyable. This is mostly because they are quite unique; not many online games offer mini features that players can choose from, so it is harder to customise other games to suit your personal tastes. If you’re looking for a fun, colourful game that is sure to put a smile on your face - and perhaps some money in your pocket - you should definitely spin the reels with Lucha Maniacs.