Ryan may be small, but the wins on offer here are huge, with a potential jackpot of 510,000 coins for just one spin of the reel! Rainbow Ryan is the latest offering from Yggdrasil gaming, and it focuses on Ryan the leprechaun, who’s here to rock your world. With six reels, 4096 ways to win and the luck of the Irish, you can win big with Rainbow Ryan. Read our full review below.

We meet Ryan on stage at the big leprechaun music festival Shamrockstock, where Ryan is ready to blow you away with his monster riffs. There are huge speaker stacks and a row of stage lights that might be interesting later in the game. And then there’s Ryan standing in front of the reels, blasting out some power chords on his guitar.

Across the reels there are card suit symbols and then the top pay table prizes associated with a pint of beer, a microphone, a pair of boots, and the pot of gold that pays 250 coins for five in a winning position. Coin values range from 0.02 coins to 2.00 coins for a total bet between 0.10 and 100 coins per spin. There’s also the max bet feature to help the high-rollers go all in with ease.

Sometimes Ryan just can't help himself, and he’ll blast a jet of pure sonic energy at the reels, lighting up the stage lights with rainbow beams. He’ll synch from two to six reels at random, and the more synched reels the bigger the potential for prizes. The wild symbol will land at random and substitute for any other symbol to create winning combinations. Synchronise your wilds and you’re in for some big rewards. 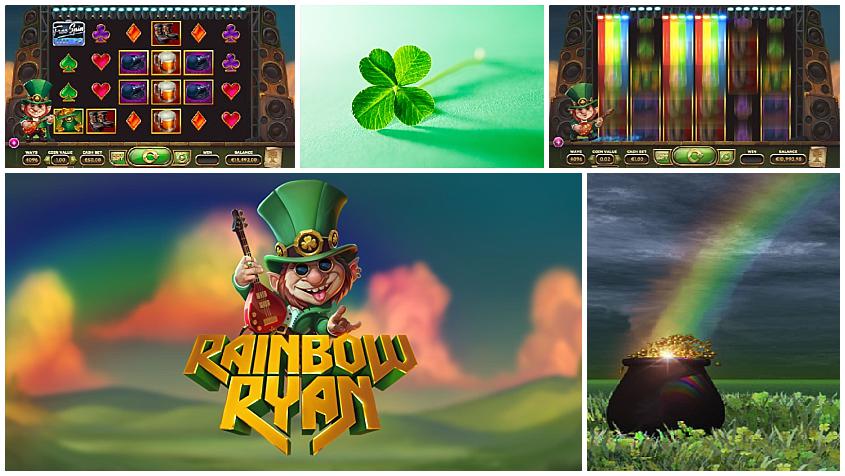 Turn It Up to Eleven

Better yet, a feature called Rainbow Reels will be active during the free spin bonus round. Not only that, but at least two reels will synchronise, and from then on the number of synchronised reels can increase during your free spins but it will never decrease. This is a great feature that has the potential to land you as very healthy jackpot indeed.

Want to jive out into the street and walk to Ryan’s beat? Then you can get away from the desktop and play on your mobile or tablet, because Rainbow Ryan is optimised for iOS and Android.

Rainbow or No Go?

With excellent opportunities for big wins in base gameplay and that generous free spins bonus, Yggdrasil's Rainbow Ryan looks like one to play, especially if you like a pounding rock soundtrack while you spin the wheels!