Fortune Falcon Wild Respins is a free online pokie for those with a taste for the wild and exotic. The game producer Ainsworth, the owner of which also founded Aristocrat Leisure Limited, has created a thrilling game packed with wilds, scatters and multipliers over a massive 30 fixed paylines. Read our full review below.

The game is set over a backdrop of the desert with dunes rising before you and an atmospheric sunset unravelling overhead. In front of this sits the main display of five reels over three rows. In the top left-hand corner, random game rules appear to tempt you with one of the many additional features that make this game so exciting.

Standard symbols include the mighty leopard, and if he makes an appearance in threes, fours or fives, you can expect to see your winnings leap. Paying out in the mid-range are the horse, camel, tropical island and treasure chest, with very generous returns. The low-range symbols are the card values nine, ten, jack, queen, king and ace, however, even these symbols deliver lavish rewards.

There is no soundtrack with this game to allow you to concentrate on the task at hand, however, sound effects accompany the spin and herald your wins.

There are three wilds, one scatter and three substitute symbols with a multiplication factor in this game, although they don’t all appear on every reel. The falcon and golden egg are wilds and substitutes, collect three golden eggs and you will be rewarded with three wild respins. When a golden egg appears on reel four it is automatically moved and collected in one of the nests above reels three, four and five.

So long as the bet remains unchanged the egg will stay in the nest giving you the chance to collect the other two and win the wild respins. During the wild respin feature the golden eggs are held on reels three, four and five and act as substitutes for the spins. The falcon can appear on reels three, four and five, however, the golden egg only makes an appearance on reel four.

The third wild is a gold coin, and there are three further gold coins that act as substitutes and carry a multiplication factor of one, two or five times your winnings. The palace symbol is the last one to watch out for. It only appears on reels two, three and four and its presence in threes, fours or fives deliver enormous prizes that may just see you buying your own palace!

Finally, drawing three scatter palaces will win you ten free games. Auto spins are available and can be set for anywhere up to one hundred spins. Your stake is multiplied by the number of paylines and the total bet per spin is displayed in the adjacent field so you can keep a close eye on your spend. 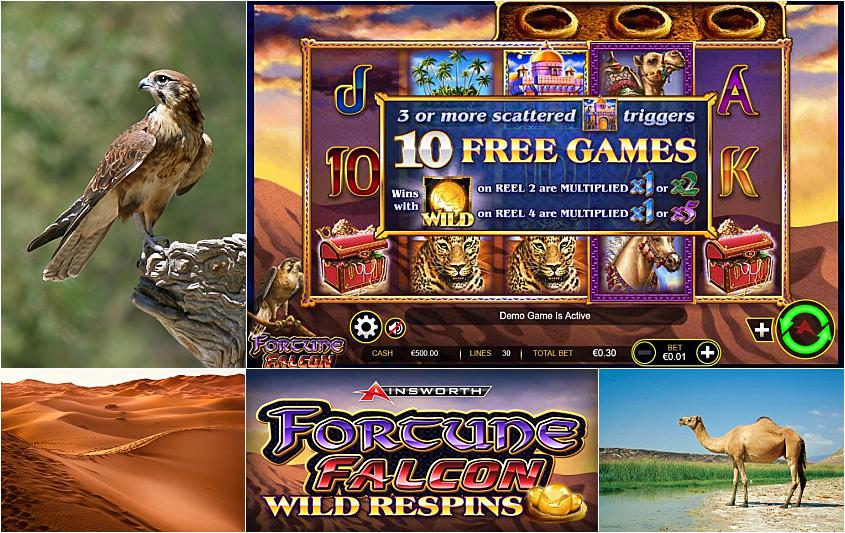 Fortune Falcon Wild Respins by Ainsworth is available on any platform. Play free pokies like this on your desktop in the comfort of your own home, or on the move on your tablet and mobile.