Go back to ancient times with Sun Chief, a new game from Ainsworth that has five reels and 30 paylines. The game is set deep in the heart of a tropical jungle, and you must search through ruined stone temples to find the treasure that is waiting for you. Read our full review below.

The Sun Chief ™ trademark is owned by Ainsworth. The use of this trademark on this website does not imply any affiliation with or endorsement of this website by the trademark owners. The link to the demo version of this game used on this page is from the NYX demo website.

Sun Chief is a fun Ainsworth game that transports players to another world (or at least an ancient world). The game is set in the jungle, and behind the reels are crumbling stone steps that lead to a giant temple that is covered with lush green plants. Above the reels some branches sway in the wind, and the right and left sides of the reels are flanked by giant stone monuments.

The overall effect is tropical and pleasant, and the graphics are very high-quality, so players may even start to imagine the cries of the tropical birds as they play! The first thing that players need to do is place their bet, which can vary between 0.30 and 3,000 per spin. This gives the game a lot of variation, and it will appeal to a wide range of players, including people who want to play it safe and people who are willing to take a risk.

Sun Chief ™ - Symbols and Features to Keep an Eye On

Some symbols are definitely more valuable than others! The wild card for the game is the Sun Chief, and he can be used to replace any of the other symbols that appear on the reels, and he can also land a full row of matching symbols on reels 3, 4 or 5. This is a fairly standard feature, but nonetheless it is a useful feature that increases your chances of a big win! 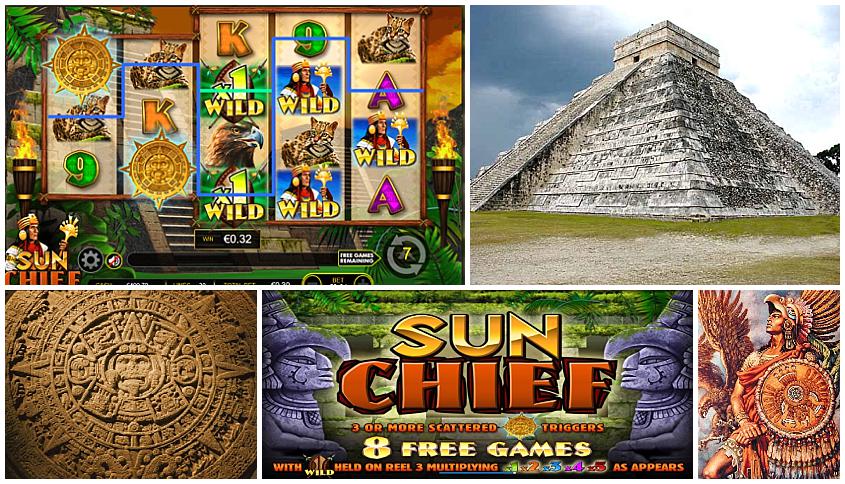 There is also a great Free Games bonus feature that you can trigger by landing at least three sun stone scatter symbols on the reels at the same time. This will release a payout of between one and 50 times your original bet, and you will also get eight free spins to play with. During the free spins round the lower-paying symbols are less likely to appear, so you are more likely to encounter a big win!

This is a fun bonus feature that definitely adds another layer of excitement to the game. Sun Chief is definitely an enjoyable game, although admittedly the theme is fairly generic, so you may want to avoid it if you only like playing games with fresh and original themes. Despite this, the game has a few exciting bonus features and the graphics are high-quality, so it is still a fun game. This game is available to play on mobile, tablet and desktop devices.