Batman is one of the most popular superheroes in today’s entertainment industry. Christopher Nolan’s Dark Knight Film series has helped to revive the brand – but it is important that we never forget the series that started it all. The Classic Batman television series from the 1960s was corny and kitschy, but it remains iconic. Aristocrat commemorates the series with its new Batman Classic TV Series pokie.

Even Adam West turn up to launch the machine in Vegas (see the second picture down). Sadly we don't have this game available as a free Pokie, but if Superheroes are your thing then we have a whole range of free games in this theme that you might enjoy. [caption id="attachment_20407" align="aligncenter" width="845"] Click on the image above to see all our Aristocrat Pokies[/caption]

The Batman Classic TV Series poker machine from Aristocrat sends players back in time. Characters from the series are featured on the reels, including The Joker, Mr Freeze and The Penguin. Of course, Batman and Robin are present, and each character offers their own generous payouts and prizes. The cabinet is also incredibly eye-catching.

The game appears in pairs on the casino or club floor with Batman on the back of one chair and Robin on the back of the other. The art on the cabinet is reminiscent of the style of classic batman comics and the design of the 1960s television series. The overall design is nostalgic, and players will really enjoy sitting down to play this poker machine. 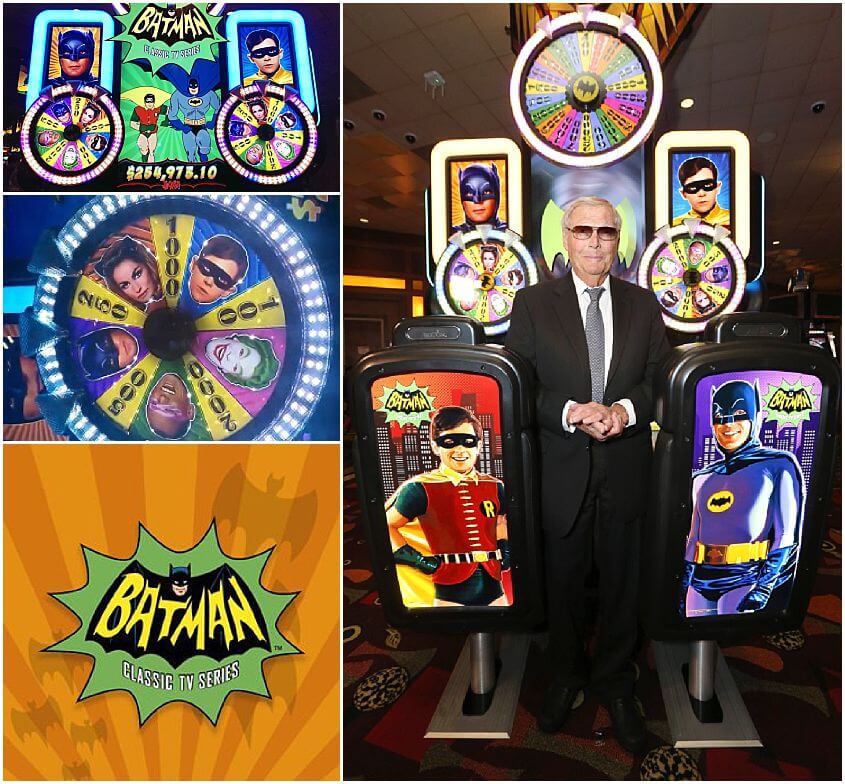 In addition to having a great design, the Batman Classic TV series from Aristocrat is packed full of generous bonus features. The game provides an entertaining and engaging experience for players with a number of free games rounds, extra credits and on-screen prizes.

As is the case in the Batman television series, the heroes gadgets and tools play a crucial role. In Batman Classic TV pokies from Aristocrat, the Batmobile Wild bonus helps players cash in on extra wins. In this bonus, the Batmobile drives across the screen and leaves a trail of wild symbols on the reels. The Bat Signal performs a similar function. When it shines on the reels, it leaves a number of wild symbols.

The Gotham City Feature Wheel bonus begins with a cut screen of the classic Batmobile speeding through rough terrain. The machine then prompts the player to look up. The prize wheel sits above the cabinet and features prize amounts and character face. Catwoman, the Joker, Batman, Robin and the Riddler are all present on the wheel. When the wheel lands on a prize amount, the cash is credited to the player.

When the wheel lands on a character’s face, it triggers one of the exciting character bonuses:

In this bonus round, the player must pick a location at which to commit a robbery. You must steal the credits without setting off an alarm. If you trigger the alarm, then the round ends.

During the Joker Spins round, you win eight free games – but they are unlike any free games you’ve ever experienced before. In this game, the configuration of the reels changes, trigger 432 potential ways to win rather than the base game’s 25 paylines. The Joker symbol is also wild, helping players to trigger winning combinations.

During this free games round, there are two random reels. They display wilds,more free spins, multipliers or credit prizes. Lucky players will even find themselves the recipients of a generous progressive jackpot prize. Jackpots worth hundreds of thousands of dollars are available on this game.

The new Batman Classic TV Series pokie from Aristocrat sets a great example for other developers. The game is fully branded, as every aspect of design and gameplay brings players into the classic Batman world. It is going to be a huge hit at land-based casinos, clubs and pokies and we hope that it will soon make its way into the online casino world.

* The 'Play for Real' button that is visible on a mobile or tablet device on this page points to an Online Casino site. This site offers visitors the opportunity to play casino games for real money once they have registered. The Casino may not have this specific game available on their site. Please check the laws related to online gambling in your country/region before clicking this button.