More Free Slots
Game of Thrones a multi-reel poker machine from Aristocrat. It is an innovative format in which each reel spins on its own, tripling the player’s chances of hitting winning combinations. Players will also enjoy the amazing bonus features based on scenes from the hit TV series. Read our full review below.
N/A
Votes

Aristocrat’s Game of Thrones poker machine made its debut in 2014. As a very new pokie, the game debuts some innovative and exciting technology that will keep players enthralled while spinning the reels. With unique bonus games based on scenes from the series and high-definition graphics, Aristocrat’s poker machine is a fantastic new addition to the poker machine market.

While we don't have the Aristocrat version available on site, we do have the Microgaming version, which is 100% Free.

If you’re not familiar with Game of Thrones, it is an HBO series that is based on the novel series A Song of Fire and Ice. It is set in the fictional lands of Westeros and Essos, chronicling the lives of the civilians and royalty on these continents. The series has made a huge splash in the TV world, attracting a number of record viewers and setting a new bar for television production.

The show is also well-known for its graphic depictions of violence and sex. Despite being a controversial series, it is incredibly popular. Viewers of all ages are obsessed with the show, and it is unlikely that you will find someone who has not ever heard of Game of Thrones. As such, it makes for a fantastic theme for a poker machine, as the brand is instantly recognisable. 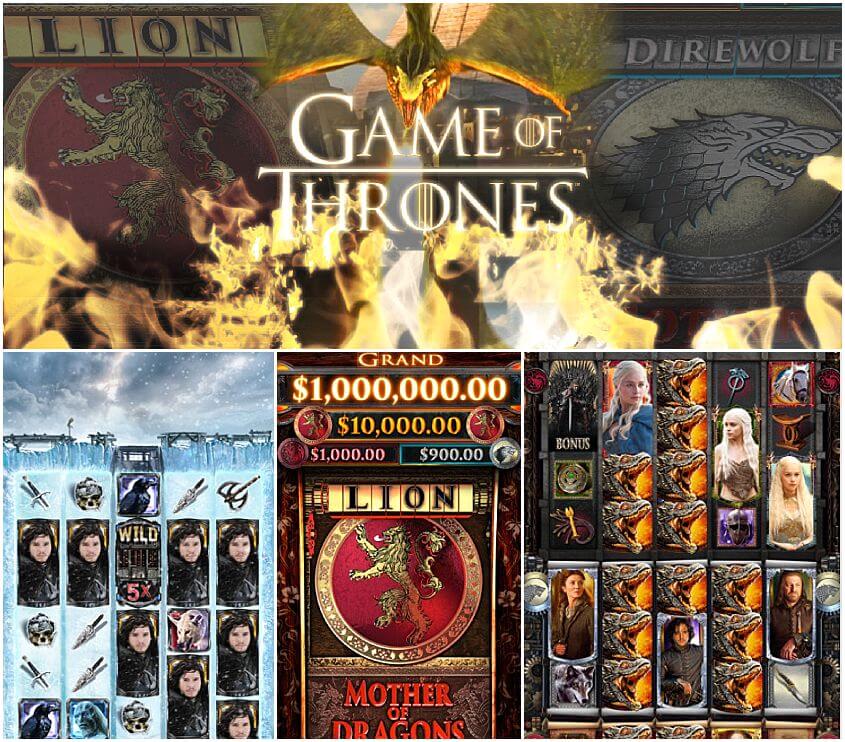 The Game of Thrones poker machine is featured in a huge cabinet measuring 84” tall. It is part of Aristocrat’s Behemoth series of poker machines, standing 10-feet fall with an 84” LCD screen with impressive 4K resolution. You certainly can’t miss it on the gaming floor. It commands attention, and will be a popular choice for both Game of Thrones fans and avid pokie players.

The television show’s most popular characters are featured as symbols on the reels, such as Cersei, Tyrion Daenerys and Jon Snow. All of these character symbols occupy two spaces, helping to increase the player’s chances of hitting winning combinations. This is quite a useful gameplay feature, integrating generous winning potential into the base game.

Another fantastic feature of this game is that it is a multi-reel poker machine. This means that there are three separate sets of reels. Each one spins on its own, tripling the player’s chances of hitting winning combinations. This is very innovative gameplay, which increases excitement and boosts winning potential. In order to trigger bonuses, the player must hit three or more bonus symbols.

When this happens, the bonus wheel spins to determine which of the following bonus features the player will trigger: Battle of Blackwater Bay: This bonus game features an iconic event from the Game of Thrones TV series, as players match character symbols to win bonus cash. Wall Bonus: During this bonus, special symbols fall onto the screen.

As they form groups, they create winning combinations to provide the player with prizes. More symbols are revealed as the ice on the wall chips away. Mother of Dragons Bonus: This bonus occurs during the base game. Dragons will fly across the reels and breathe fire on to certain symbols to turn them into wild symbols. Progressive: When this bonus is triggered, the player receives one of the four generous progressive jackpots available.

These jackpots are always climbing, so players are always in for the chance to win a life-changing sum of money.

* The 'Play for Real' button that is visible on a mobile or tablet device on this page points to an Online Casino site. This site offers visitors the opportunity to play casino games for real money once they have registered. The Casino may not have this specific game available on their site. Please check the laws related to online gambling in your country/region before clicking this button.